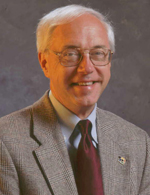 Dr. Frederick J. Leonberger is acknowledged as a leader in high-performance fiber-optic communications. During his long career, he helped create many photonic component and module technologies that significantly advanced the field.

While at the Lincoln Laboratory at the Massachusetts Institute of Technology in Lexington, Massachusetts, and at the United Technologies Research Center in East Hartford, Connecticut, Dr. Leonberger led the development of high-performance external modulation components in lithium niobate (LiNbO3) and semiconductors. He contributed directly to the development of Fiber Bragg Gratings, a component that stabilizes the wavelength of diode lasers, and fiber lasers, and other components in wavelength division multiplexing networks.

An IEEE Fellow, Dr. Leonberger is a past president of the IEEE Lasers and Electro-Optics Society (LEOS) and has received the IEEE Third Millennium Medal and the LEOS IEEE Quantum Electronics Award.

Retrieved from "https://ethw.org/w/index.php?title=Frederick_J._Leonberger&oldid=145805"
Categories:
This page was last edited on 25 January 2016, at 20:14.
About ETHW
Policies and disclaimers