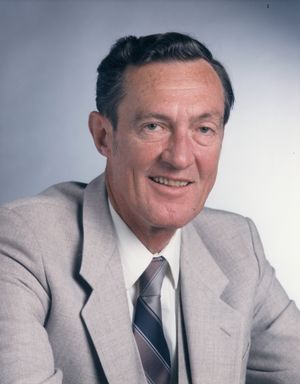 Dr. Simmons began his career as a member of the Technical Staff of TRW Systems, Redondo Beach, CA in 1960, where, until 1971, he was involved in research and development on a variety of laser systems and concepts. From 1968-71, he concurrently served as Professor of Electrical Engineering at UCLA, supervising five doctoral theses. In 1971, Dr. Simmons joined the Senior Technical Engineering Staff at Lawrence Livermore National Laboratory. He held positions of increasing responsibility in systems design and engineering for solid state inertial confinement fusion laser facilities, including the early development of Cyclops, Argus, and Shiva. In 1978, Dr. Simmons became Senior Technical/Engineering Manager of the $186M Nova Fusion Laser Project at LLNL, which he saw to completion and first operation in December 1984. Dr. Simmons is currently Director, Group Research, TRW Space and Technology Group, Redondo Beach, CA.

Dr. Simmons is the holder of six patents in the field. He has authored and/or coauthored over 70 articles and papers. He has led numerous symposia on the topic of Fusion Engineering and is Co-chairman of the 12th such IEEE Symposium to be held in Monterey, CA in October 1987. Dr. Simmons received the Distinguished Teaching Award in Engineering from UCLA in 1971 and, in 1985, was named one of the Top 100 Innovators by SCIENCE DIGEST for his work on Nova. He is a member of Phi Beta Kappa and Sigma Xi honor societies.

Retrieved from "https://ethw.org/w/index.php?title=William_W._Simmons&oldid=172906"
Categories:
This page was last edited on 25 January 2019, at 19:02.
About ETHW
Policies and disclaimers