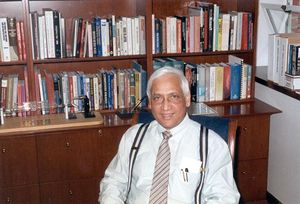 C. Kumar N. Patel was born in Baramati, India on 2 July 1938. He received the B.E. from the College of Engineering in Poona, India and the M.S. and Ph.D. in Electrical Engineering from Stanford University in 1959 and 1961, respectively.

Patel's discovery, in 1963, of the laser action on the vibrational-rotational transitions of carbon dioxide and his invention, in 1964, of efficient vibrational energy transfer between molecules, led to his series of experiments which demonstrated that the carbon dioxide laser was capable of very high cw and pulsed power output at very high conversion efficiencies. No other laser has made a greater impact on society.

In 1966, Patel began pioneering studies which created a new field of infrared nonlinear optics which led to his 1969 invention of the spin-flip Raman laser, a class of tunable infrared lasers and the first tunable Raman laser in any wavelength region. Using this laser, he carried out very high resolution spectroscopy of both ground and vibrationally-excited states of molecular gases, resulting in his contribution to the problem of atmospheric pollution detection. In 1970, he developed a tunable laser opto-acoustic measurement technique for extremely small concentrations of pollutant gases. In 1973, he carried out the first measurements of the temporal variation of concentration of nitric oxide in the stratosphere, which provided crucial data bearing on the problem of ozone depletion by man-made nitrogen oxide emission from sources such as the SST. His opto-acoustic spectroscopy studies of cryogenic liquids and solids, begun in 1980, are providing crucial data in understanding these materials and have culminated in the first observations of high vibrational over-tone absorption of molecular hydrogen in solid hydrogen. Patel's current research interests include spectroscopy of highly transparent liquids and solids, and surgical and medical applications of carbon dioxide lasers.

Patel and his wife Shela, a Graduate Advisor at Kean College, NJ, have two daughters: Neela, a second year Ph.D. student in Molecular Biology at UCLA; and Meena, a Freshman at Claremont-McKenna College. His interests include tennis, windsurfing, and gourmet cooking.