Technology in the James Bond Universe 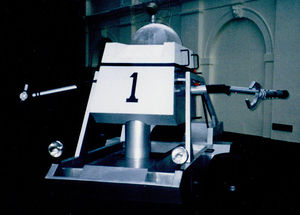 This photo, which features the Moonbuggy from the James Bond movie Diamonds Are Forever, was taken during a tour of Pinewood Studios outside of London, in the summer of 1992. Photographer: Lennart Guldbrandsson

This article was initially published in Today's Engineer on January 2006

When Goldfinger, the third James Bond movie, opened in 1964, most people had never heard of a laser, even though Ted Maiman at Hughes Aircraft had built such a device in 1960. An early scene in the movie featured an industrial laser, which Auric Goldfinger helpfully explained for Bond-- and the grateful audience. The studio was proud of this scene, boasting in a press release that the movie "is sure to give the laser its greatest international publicity as a scientific development of great power and worth in the modern world." (The studio is today no doubt proud of some classic lines in that scene: "Choose your next witticism carefully, Mr. Bond, it may be your last"; and Bond: "Do you expect me to talk?"; Goldfinger: "No, Mr. Bond, I expect you to die.")

In 21 films over four decades, the Bond movies have introduced many new technologies to the public. From Russia with Love (1963), the second Bond movie, shows the use of a beeper, eleven years before Motorola's Pageboy, the first commercially successful beeper in the United States. Many people learned for the first time about numerous other communications devices from Bond movies: the scrambler used in Thunderball (1965) utilized a form of secure communications; a videophone appears in a car in You Only Live Twice (1967); miniaturized two-way radio, in the form of a lady's compact in On Her Majesty's Secret Service (1969); video conferencing is portrayed in Never Say Never Again (1983); a frequency scanner is used to locate police radio, in The Living Daylights (1987); electronic money transfer, in GoldenEye (1995); and using a cell phone to take a picture and transmit it elsewhere, in Die Another Day (2002).

The Aston Martins, Ferraris and other cars that Bond has driven have attracted a great deal of attention. So have various technologies found in vehicles, such as a plan-position-indicator screen allowing Bond to track a planted transmitter in Goldfinger (1964); cruise control in a tanker truck in Licence to Kill (1989); remote control of a BMW in Tomorrow Never Dies (1997); and the navigation system in a speedboat that allows Bond to take a shortcut through London in The World is not Enough (1999).

New military technologies are present in many Bond movies. There is an infrared scope on a sniper rifle in From Russia with Love (1963) and night-vision goggles in The Living Daylights (1987). A surveillance satellite tracks submarines with an infrared camera (using "heat signature recognition") in The Spy Who Loved Me (1977). Two important anti-radar techniques, both developed during World War II, are shown: jamming in Moonraker (1979) and antiradar coating (of a stealth ship) in Tomorrow Never Dies (1997). We learn about AWACS planes in Licence to Kill (1989) and about terrain-following cruise missiles (seeing how the guidance system finds a match between stored information and observed terrain) in Never Say Never Again (1983). The Living Daylights (1987) shows the use of a heads-up display for firing missiles, and The World is not Enough (1999) shows a sniper using a laser to fix a target.

Not surprisingly, security systems occur in many Bond movies. Diamonds are Forever (1971) shows the surveillance system in a casino, and video surveillance plays a large part in Octopussy (1983). Licence to Kill (1989) includes a pistol with "signature grip," allowing it to be fired by a specific person only. Several techniques for access to secure areas are shown: iris-pattern matching in Never Say Never Again (1983), voice-matching in GoldenEye (1995), and handprint-matching in Die Another Day (2002).

The first Bond movie, Dr. No (1962), contains an explanation of a Geiger counter. A View to a Kill (1985) presents a surveillance robot. Several Bond movies, the first of them being For Your Eyes Only (1981), show the automatic searching of an image database. New consumer-electronics products appear in Bond movies, such as the Pulsar digital watch in Live and Let Die (1973), and a liquid-crystal TV screen in Octopussy (1983).

The Bond movies have made people interested in technology, but along with the presentation of actual or feasible devices is an admixture of fantasy technology. The "active camouflage" that makes a car invisible in Die Another Day (2002); the Rolex wristwatch that produces a magnetic field powerful enough to deflect a bullet in Live and Let Die (1973); and the electronic device implanted in the neck that makes one person's voice sound like another person's in Diamonds are Forever (1971) are hardly realistic. But most of the technology in Bond movies is quite authentic — even these counterexamples are theoretically possible. The Bond movies have become more and more realistic with time. Many of the gadgets that amazed audiences in earlier decades, such as pagers, portable phones, tracking devices and miniature voice-recorders, have become commonplace.

Retrieved from "https://ethw.org/w/index.php?title=Technology_in_the_James_Bond_Universe&oldid=174697"
Categories:
This page was last edited on 1 April 2019, at 20:16.
About ETHW
Policies and disclaimers