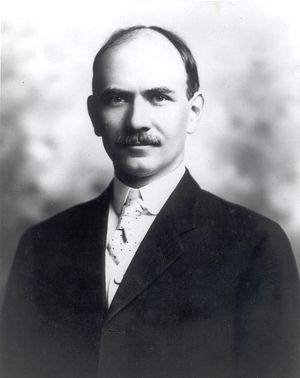 Dugald C. Jackson, AIEE President, 1910 - 1911, supervised the design and construction of several railway and power plants when he worked as an engineer at Sprague Electric Railway and Motor Company and later as an engineer for Edison General Electric Company.

Dugald Caleb Jackson was born at Kennett Square, Pennsylvania, 13 February 1865. He graduated from Pennsylvania State College in 1885, with the degree of C.E. He then devoted two years to postgraduate study in electrical engineering at Cornell College, serving as instructor in physics in 1887.

Between 1889 and 1890 he was vice-president and engineer for the Western Engineering Company at Lincoln, Nebraska, engaged in the design and construction of electric light and power plants, and distribution systems in that part of the country. He then served as assistant chief engineer with the Sprague Electric Railway and Motor Company, at New York (1889-90), and as chief engineer of the central district of what was then the Edison General Electric Company (1891). In these two positions he supervised the design and construction of many electric railway and power plants.

During World War I, Jackson served overseas as Lieut.-Col. of Engineers. He was a jury of electrical awards at the World's Columbian Exposition, Chicago, 1893, and at the Pan-American Exposition, Buffalo, 1901. In 1929 he was U.S. Government delegate to the World Engineering Congress. He was a chevalier of the French Legion of Honor, and a member of many technical societies, among them the American Institute of Electrical Engineering, the Society for Promotion of Engineering Education, and the Boston Society of Civil Engineers. He served as AIEE president from 1910 to 1911 and in 1938 he received the Institute's Edison Medal, "For outstanding and inspiring leadership in engineering education and in the field of generation and distribution of electric power."

Jackson was the author of many technical papers and the inventor of a number of electrical devices, for which he held patents in the fields of electric rotating machinery and transformers, electric motor starting devices, telephone equipment, and train lighting. He is best remembered, however, for his outstanding work in engineering education. He died 1 July 1951.