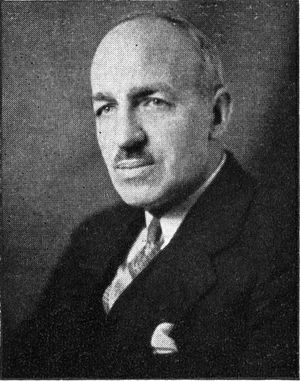 Ralph H. Tapscott was born in Brooklyn, New York, August 31, 1885. After a preliminary education at Erasmus Hall Academy & Boys' High School, he entered business in the leather industry, which he left two years later to complete his education.

Upon graduation with the degree of B. S. in Electrical Engineering from Union College in 1909, he joined the Testing Department of the General Electric Company at Schenectady, transferring from there to the Lighting Engineering Department, where his duties largely involved work with the New York group of utilities.

On October 1917, Mr. Tapscott resigned from the General Electric Company to become Assistant Chief Electrical Engineer of The New York Edison Company, and in 1925 was made Electrical Engineer of that Company. Tapscott was elected president of Con Ed in 1937, became chief executive officer in 1942, chairman in 1949, and after his retirement in 1953, continued to serve as a trustee until 1963.

Mr. Tapscott joined the AIEE in 1918, and has served as a member of the executive committee of the Standards Committee for a number of years, Electrical Machinery Committee one year, and Power Transmission & Distribution Committee two years. He has been a member of the Headquarters Committee since 1928. He was chairman of the New York Section.

Retrieved from "https://ethw.org/w/index.php?title=Ralph_H._Tapscott&oldid=178740"
Categories:
This page was last edited on 3 March 2020, at 18:21.
About ETHW
Policies and disclaimers