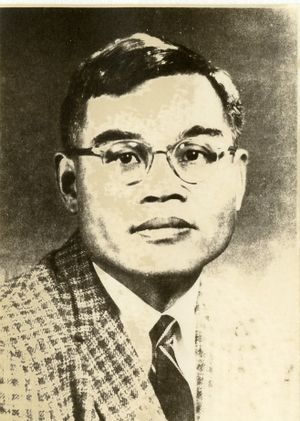 Ping King (P. K.) Tien was born in Chekiang, China in 1919. He earned his B.S. degree in Electrical Engineering from National Central University in China in 1942 and M.S. and Ph. D. degrees in Electrical Engineering from Stanford University in 1948 and 1952, respectively. He joined Bell Telephone Laboratories in 1952 and was appointed Head, Electron Physics Research Department in 1959.

His current research deals with the area of integrated optics which is an important adjunct to the field of fiber optics. Here, it was his profound understanding of the coupled electromagnetic waves that led him to discover a simple but extremely elegant technique of coupling free space optical propagation modes to the guided modes of optical thin film waveguides. This discovery which resulted in a "prism-film coupler" can be considered a singular event that has completely revolutionized the experimental investigations of light wave propagation in thin films. His analysis led Dr. Tien to the discovery of yet another coupler- a tapered thin film coupler which has become important in coupling of a guided thin film mode to a guided mode of an optical fiber, and in the coupling of guided mode of one film to that of another. Dr. Tien has explored the low loss materials for passive thin film guides as well as for active devices such as thin film modulators, deflectors, switches, etc. He led the efforts towards the realization of low-loss garnet films through this theoretical study of the magnetic materials. The field of magneto-optical phenomena in thin films was thus born, These studies have now resulted in operational large band width (> 500 MHz) magneto-optic modulators and electrooptic thin film deflectors. He has also been instrumental in the pioneering studies of prisms, reflectors, lenses and polarizers for thin film optics. Thus Dr. Tien has literally founded the field of integrated optics.

Tien received the 1979 IEEE Morris N. Liebmann Memorial Award "For contributions to integrated optics technology." He is recognized most widely for his research in microwave amplifiers and integrated optical circuits.

Retrieved from "https://ethw.org/w/index.php?title=Ping_King_Tien&oldid=166556"
Categories:
This page was last edited on 1 October 2018, at 18:15.
About ETHW
Policies and disclaimers