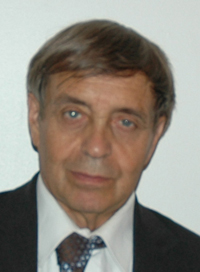 Dr. Michael Shur is the Patricia W. and C. Sheldon Roberts Professor of Solid State Electronics in the Department of Electrical, Computer, and Systems Engineering at Rensselaer Polytechnic Institute in Troy, N.Y. He received his master’s in electrical engineering in 1965 (with honors), from St. Petersburg Electrotechnical Institute in St. Petersburg, Russia, and a Ph. D. (candidate) degree and Doctor of Physics and Mathematics degree from A.F. Ioffe Institute of Physics and Technology, St. Petersburg, in 1967 and 1992, respectively.

He has served as distinguished lecturer for the IEEE Electron Devices and the IEEE Microwave Theory and Technique Societies, given tutorials at conferences worldwide, taught courses for practicing engineers and given IEEE-sponsored lectures for academic researchers worldwide. He has taught at the University of Virginia, University of Minnesota, Oakland University, Cornell University, and Wayne State University and conducted research at the A.F. Ioffe Institute in St. Petersburg, Russia and at IBM in Yorktown Heights, N.Y. He has published and edited many key graduate texts in solid state electronics that have been translated into many languages.

Dr. Shur has developed new courses on advanced semiconductor devices and novel teaching techniques among them, the development of a WEB Remote Laboratory for giving students hands-on experience and allows professors from many countries to exchange course materials.

Dr. Shur and Artūras Žukauskas discuss the benefits of solid-state lighting technologies in their paper entitled “Solid-State Lighting: Towards Superior Illumination,” for which they received the 2007 IEEE Donald G. Fink Prize Paper Award. The paper compares the approach of generating white light from solid-state phosphor LEDs by using multichip lamps comprised of colored LEDs. The tutorial paper is distinctive in that it describes a unique optimization algorithm and a report on the implementation of the versatile solid-state lamp, which utilizes a computer-controlled spectral power distribution. Under appropriate psychophysical verification, these lamps are expected to have a significant impact on the lighting industry and already have been used to treat seasonal affective disorder, sometimes referred to as “winter depression,” and to facilitate energy-efficient plant growth.