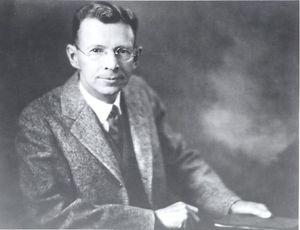 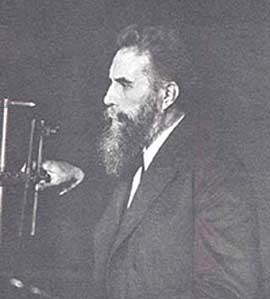 William David Coolidge was born in Hudson, Massachusetts, on 23 October 1873. He excelled in his one-room elementary school and small high school, and in 1891 he enrolled in a nine-year-old electrical engineering program at the Massachusetts Institute of Technology in Cambridge.

A fellowship permitted him to go on to the famed University of Leipzig to earn a Ph.D. in physics in 1899. He then returned to MIT as an assistant to the prominent physical chemist, Arthur A. Noyes. Coolidge had been working with Professor Noyes for five years on research into the electrical conductivity of aqueous solutions at high temperatures when the founder of General Electric (GE) Research Laboratory, Willis R. Whitney, surprised him with an offer to join the laboratory in 1900. As described in the company's annual report of 1902, the laboratory was "to be devoted exclusively to original research," and, the report added, "It is hoped by this means that many profitable fields may be discovered." Whitney understood very well that this meant commercial products as well as the pursuit of fundamental knowledge.

When Coolidge arrived at the modest, three-story brick Building 6 of GE's Schenectady, N.Y., facility on September 1905, the fledgling laboratory was already in danger of failing in its primary mission of ensuring that its basic research would yield patentable inventions for GE. It was Coolidge who ultimately saved the day for the Research Laboratory. Because GE's lighting business depended heavily on the Edison high-resistance carbon-filament lamp, Whitney and his management were trying desperately to leapfrog two major competing lighting innovations, the ceramic-filament lamp and the mercury-vapor lamp, which were threatening to make the Edison lamp obsolete. Whitney assigned Coolidge to explore the possibilities of tungsten, and there began a six-year struggle that Coolidge later compared to lock-smithing: "Imagine then a man wishing to open a door locked with a combination lock and bolted on the inside. Assume that he does not know a single number of the combination and has not a chance to open the door until he finds the whole combination, and not a chance to do so even then unless the bolt on the inside is open. Also bear in mind that he cannot tell whether a single number of the combination is right until he knows the combination complete. When we started to make tungsten ductile, our situation was like that." Coolidge succeeded in bringing tungsten to the ductile state by sheer determination, although there were times when the pressure was so severe he felt like quitting GE.

By early 1911, GE had scrapped all its previous lamp-making equipment and was selling tungsten-filament Mazda C light bulbs. In the previous five years it had spent over $100,000 on the ductile- tungsten research, but the patent that Coolidge received in 1912 amply repaid the investment. In 1927 the patent was invalidated on the grounds that ductility was a property inherent in metallic tungsten and that "Coolidge metal" was therefore a discovery but not a patentable invention. Tungsten lamps are still made essentially the same way Coolidge made them 70 years ago.

Coolidge's second major invention, the X-ray tube, is also essentially the same today as it was then. Coolidge had been fascinated by William Roentgen's discovery of X-rays in 1895 and had experimented with them on his own. Thus, it was a natural step from the ductile-tungsten work to experimenting with tungsten as a target material. A theoretical assist from the brilliant Irving Langmuir, hired by Whitney in 1909, gave Coolidge an important lead, and the tube was introduced to the world at a radiologist's dinner in 1913. During the next 15 years he made many further technical contributions to X-ray applications.

Coolidge was awarded the American Institute of Electrical Engineers (AIEE) Edison Medal in 1926, "for the origination of ductile tungsten and the fundamental improvement of the X-ray tube." In an example of the integrity for which Coolidge is still remembered, he shortly after declined the award on the basis that his ductile tungsten patent was invalid. The AIEE committee got Coolidge to accept the 1927 AIEE Edison Medal, by awarding it "For his contributions to the incandescent electric lighting and the X-rays art."

By April 1932, the strain of steering the laboratory through the economic storms that followed the 1929 stock-market crash were proving too much for Coolidge's mentor, Whitney, and he had to step down. Coolidge was named director on 1 November 1932, a day when the newspapers were headlining Franklin D. Roosevelt's presidential campaign plea in Boston for a five-day work week, Federal aid for the unemployed, and a commitment to the premise that "this nation owes a positive duty that no one should be permitted to starve." As GE's sales tumbled (by 1935 they were one half of their 1930 peak of $396 million), Coolidge was faced with the immediate challenge of ensuring the Laboratory's survival, which he met this in several ways. The laboratory was put on a four-day workweek, expenses were slashed by one third, and the work force was cut from the 1929 high of 555 people to 270. However, in sharp contrast with some other laboratories, there were no panicky wholesale layoffs, but rather careful pruning. With the full backing of GE's president, Gerard Swope, Coolidge accomplished the reduction largely by moving support people to other divisions. Whenever possible, professional-staff reductions were accomplished by finding academic positions for the scientists. To maintain morale, the highest priority under such circumstances, Coolidge conveyed the message that no more drastic changes were in store and that research would continue. A man remembered by former associates for his kindness, modesty, integrity, and sobriety, the 60-year-old research director got this message across through his own business-as-usual demeanor, as well as by encouraging Whitney to continue doing research at the laboratory and visiting with other scientists.

The strategies for survival clearly succeeded. As early as December 1933, Swope was able to urge Coolidge to "add four or five chemists to our staff to develop new products." This was a significant increase in a doctoral level staff of perhaps 20, and the enlarged group did come up with significant chemical-based products, notably the silicones, that would lead GE into some of its biggest and most profitable businesses in the years to come.

Coolidge was unusual because he was both a major technical contributor and a successful research leader during a trying time in GE's history -the Depression of the 1930s. Few people have been able to combine these roles as successfully as Coolidge, who lived to the respectable age of 102. He died on 3 February 1975.

Retrieved from "https://ethw.org/w/index.php?title=William_Coolidge&oldid=147624"
Categories:
This page was last edited on 8 March 2016, at 18:33.
About ETHW
Policies and disclaimers