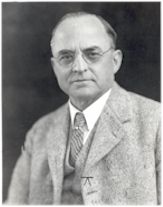 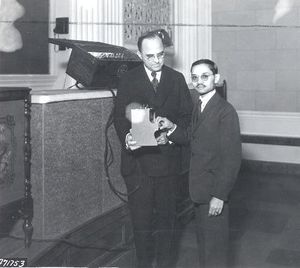 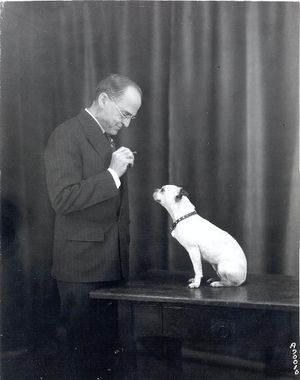 Willis R. Whitney, longtime director of the Research Laboratory of the General Electric Company, is widely considered one of the fathers of industrial research. His laboratory gained a world-wide reputation for the quality of its work and the importance of its results. His influence extended far beyond GE, as representatives from other companies—Kodak, General Motors, and Dupont among them—journeyed to Schenectady, New York, to learn how to organize the hunt for breakthrough discoveries.

Willis R. Whitney was born in Jamestown, New York, on 22 August 1868, the son of John J. and Agnes (Reynolds) Whitney. When he applied to the Massachusetts Institute of Technology, he was accepted on the spot, graduating in 1890 to become an assistant professor of chemistry there. In 1896, he received his Ph.D. from Leipzig.  While working as an assistant professor of chemistry at MIT, Whitney grew dissatisfied with narrow academic work and thus jumped at the opportunity, provided by Elihu Thompson in 1900, to become director of the GE Research Laboratory.

As described in the company's annual report of 1902, the laboratory was “to be devoted exclusively to original research”—but by no means to science simply for the sake of science. “It is hoped,” the report stated, “that many profitable fields may be discovered.” Whitney understood very well that this meant commercial products as well as the pursuit of fundamental knowledge.

The laboratory soon proved the value of the application of organized research to industry. GE’s most urgent need at the outset of his tenure was to produce more economical lamp filaments. Whitney devoted the lab to the problem, and was himself in the midst of the experimentation. With the initial goal of removing impurities, or “ash,” from the cotton-derived base of the filament (which was then coated with graphite) the lab ended up developing a new form of “metallized” carbon, essentially a hollow strand of graphite that had a positive coefficient of resistance comparable to that of pure metals. Giving twenty-five percent more light for the same wattage, this was the first radical improvement in the carbon incandescent filament since Edison first produced it. Millions of the new lamps were sold in a single year.

The laboratory made a still greater contribution to electric lighting when it solved the problem of mechanically working tungsten into the drawn wire which has given the tungsten lamp its universal application. The laboratory also worked out a number of applications for wrought tungsten, replacing platinum targets in X-ray tubes and platinum contacts in spark coils, magnetos and relays. Another success of the laboratory was the Coolidge X-ray tube, which superseded all earlier types and came in a wide range of sizes: from a large 50 milli-ampere, 250,000-volt version down to a dental tube so compact that both it and its transformers could be enclosed in an oil-filled metal casing small and light enough to be swung on a bracket in the dentist’s office.

In the early years, Whitney gave his personal attention to every incoming proposal and outgoing invention. After a brush with death in 1907 (due to untreated appendicitis) and three-month convalescence, he devoted himself more to the general administration of the laboratory. Especially in newer areas of research, and those closer to the immediate business interests of GE, he sought to energize teams in related projects. He opened up careers to the talent that he recruited. His broad scientific knowledge, ability as a chemist and resourcefulness as an experimenter lay the basis for all the work of the laboratory. His energy and personal magnetism created a powerful esprit de corps in the staff. The story of the GE laboratory, from its inception through a period of extraordinary growth, was the story of Whitney's personal achievement.

He stepped down as director in 1932, in the midst of both national and personal depression. In his retirement, he devoted himself to his hobbies—turtles, arrowheads, and speculations about the workings of the mind—and would on occasion write about them in popular magazines. He was also a member of countless institutions, among them the American Institute of Electrical Engineers, the American Society of Electrochemical Engineers, the National Academy of Sciences, the British Institute of Metals, and the National Research Council. He received many awards and honors, such as the Willard Gibbs Medal in 1920, the Perkin Medal in 1921, and the Gold Medal of the National Institute of Social Sciences in 1928. In 1934, he was awarded the AIEE Edison Medal, for “his contributions to electrical science, his pioneer inventions, and his inspiring leadership in research.”