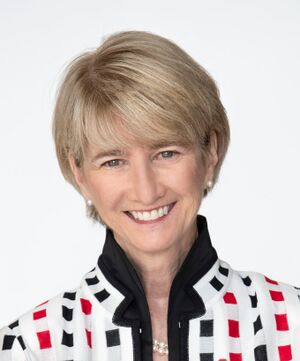 An internationally recognized leader in engineering, education, the private sector, and government, Kristina M. Johnson has served as a role model for women in engineering and has helped increase the participation of underserved populations in science and technology elds. At the University of Colorado at Boulder, she cofounded and directed the U.S. National Science Foundation’s Engineering Research Center for Optoelectronic Computing Systems. She designed a new class of optoelectronic light engines that enabled highquality, digital projection HDTV and helped advance 3D cinema applications. Johnson was the rst woman to serve as dean of Duke University’s Pratt School of Engineering, where she established cross-disciplinary initiatives in photonics, bioengineering and biologically inspired materials, and energy and the environment. The rst woman provost at Johns Hopkins University, she led a university-wide strategic planning process called Framework for the Future, which included the creation of the Mosaic Initiative to recruit outstanding underrepresented faculty. As chancellor of the State University of New York, she developed a vision comprising individualized education, innovation and entrepreneurship, and sustainability. One of her initiatives was PRODI-G (Promoting Recruitment, Opportunity, Diversity, Inclusion and Growth), which is designed to enable SUNY campuses to hire up to 1,000 early-to-mid-career professors over the next decade, including underrepresented populations and women in STEM disciplines. In 2009, she was appointed as the Under Secretary of Energy for Energy and Environment in the U.S. Department of Energy, directing a portfolio that included a base budget of US$116 billion with US$36 billion in ARRA funding research, development, demonstration, and deployment projects involving the U.S. national laboratories, universities, state and local governments, and private industry in renewable energy, carbon capture and sequestration, nuclear power, smart grid, and nuclear waste. She later founded Cube Hydro Partners, a company that builds and upgrades hydroelectric power plants with modern technology to help fight climate change.

Retrieved from "https://ethw.org/w/index.php?title=Kristina_M._Johnson&oldid=187141"
Categories:
This page was last edited on 19 January 2022, at 17:10.
About ETHW
Policies and disclaimers