The Season of (Electric) Light 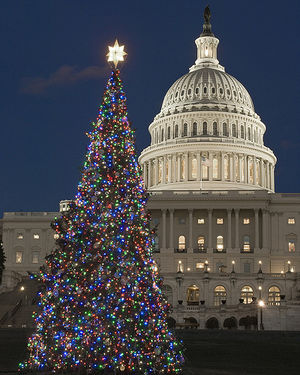 Before the last autumn leaf has fallen, many cities and towns will be sponsoring their annual holiday tree and menorah lightings. Illuminated municipal buildings and shopping centers will lure customers to linger past dark, and at the top of many holiday gift lists will be flat-screen televisions and electronic games and gadgets. From November until January, the season is awash in light.

While candles have marked many holiday traditions for centuries, electric light added a new dimension. In 1882, just three years after Thomas Alva Edison’s invention of the light bulb, an enterprising associate, Edward Johnson, thought of replacing the customary Christmas tree candles with electric light bulbs. But adorning the tree with Johnson's lights was not a simple matter of untangling the string of lights and draping them around the tree — the bulbs needed to be specially made and hand attached to an electric wire. No Saturday afternoon project, achieving a lighting spectacle required a professional to assemble and hang the decorations. Nevertheless, the idea caught on, with President Grover Cleveland inaugurating the first electrified White House Christmas tree in 1895.

>Innovations in lighting technology, including parallel lights that remained lit after one bulb in a string burned out, sets of lights that could be connected end-to-end to create longer chains, safety measures to prevent fires, and aesthetic improvements — new shapes, designs and colors — eventually followed, although it would still be many years before the now standard lights came into widespread household use after the First World War.

By 1923, Calvin Coolidge had made the annual National Tree Lighting an event of political significance. The significance of the tree lighting ceremony grew with the advent of the Second World War. Crowds gathered and others listened to the proceedings on the radio shortly after the outbreak of war in 1941, as Franklin Roosevelt — joined by British Prime Minister Winston Churchill in a surprise diplomatic visit to Washington, D.C. — made moving speeches and were joined in songs and hymns in celebration of peace. The tree was not lit again until the end of the war in 1945. Lighting — or not lighting — the tree became an occasion marked with symbolism. The tree remained dark until thirty days of mourning had passed following the assassination of John Kennedy in 1963, and again in 1979 and 1980 in honor of the Americans held hostage in Iran. In 1995, the tree was lit for the first time by solar energy.

In keeping with efforts to be energy efficient, the tree at the National Capitol is also now lit with LEDs. Light Emitting Diodes (LEDs) are the newest lights gaining popularity. Because LEDs do not require filaments or glass bulbs, they can produce bright white light, and through the use of refractors, a range of vibrant colors. Moreover, they are being made in a huge variety of shapes and sizes. Even more appealingly, especially in view of the rising economic and environmental costs of energy consumption, the new lights burn longer and more efficiently, and are less subject to damage, all of which make them a desirable consumer alternative to traditional lighting.

LEDs are also changing the face of another holiday custom — the exterior lighting of the Empire State Building. Like the Eiffel Tower in Paris, the Empire State Building is a symbol of a great city. One of the nation’s most recognizable historic landmark buildings, the Empire State Building, has been illuminated since its completion in 1931, but it was not until the 1970s that colored lighting, which changes according to the holidays, was introduced. The first holiday lighting was red and green for Christmas, and blue and white was added years later to mark the Hanukah holiday. Today, advances in technology are changing the way the building is lit, however. With the recent conversion to LEDs, the building’s 208 floodlights no longer need to be adjusted or changed by hand, a previously time-consuming and laborious process. The future looks even brighter, with plans on the horizon for “intelligent illumination” capable of creating endless variety of designs. With more spectacular effects now easily at hand, computer-controlled LEDs will likely change the face of this holiday institution.

Retrieved from "https://ethw.org/w/index.php?title=The_Season_of_(Electric)_Light&oldid=178322"
Categories:
This page was last edited on 19 February 2020, at 16:22.
About ETHW
Policies and disclaimers