On this site in May 1960 Theodore Maiman built and operated the first laser. A number of teams around the world were trying to construct this theoretically anticipated device from different materials. Maiman’s was based on a ruby rod optically pumped by a flash lamp. The laser was a transformative technology in the 20th century and continues to enjoy wide application in many fields of human endeavor. 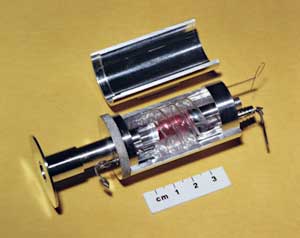 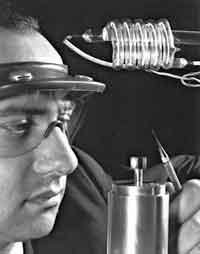 The plaque may be viewed at the building where the invention occurred, at the Hughes Research Lab, 3011 Malibu Canyon Rd., Malibu, California, U.S.A. During work hours, the gate is open and a reception area is available to welcome visitors.

Theodore Maiman developed the first working laser at Hughes Research Lab in 1960 and his paper describing the operation of the first laser was published in Nature three months later.[1] Since then, more than 55,000 patents involving the laser have been granted in the United States. Today, lasers are used in countless areas of modern life. Some examples include telecommunications, medical diagnostics and surgery, manufacturing, environmental sensing, basic scientific research, space exploration and entertainment. In the past, the IEEE has recognized the significance of the laser as being one of the key technical achievements of the 20th century.

Although there is some controversy over the proper credit for the "open cavity" design used by Maiman, there is complete consensus among both historians and the broader public (e.g., the National Inventors' Hall of Fame) that among all the teams seeking to build a laser based on the Schawlow-Townes paper, Maiman was the first to succeed (see Joan Lisa Bromberg, The Laser in America 1950 - 1970, MIT Press, Cambridge, Mass., 1991; pp. 86 - 92).

While there were no previous lasers before Maiman’s achievement, a predecessor of the laser, called the MASER, for "Microwave Amplification by Stimulated Emission of Radiation", was independently developed in 1954 at Columbia University by Charles Townes and coworkers[2] and in Russia by Nicolay Basov and Alexsandr Prokhorov.[3]

Soon after the maser was demonstrated, Schawlow at Bell Labs and Townes began thinking about ways to make infrared or visible light masers (called optical masers by Townes and Schawlow). While microwave cavities were well understood in the 1950’s, it was not clear how one might make an optical cavity that incorporated gain. In 1957 Schawlow and Townes eventually realized the solution was aligning two highly reflecting mirrors parallel to each other, forming a Fabry-Perot cavity, and placing the amplifying medium in between. Resonator side walls were not necessary as they were in the microwave case. They soon performed a detailed analysis of laser theory as well as requirements and published a seminal Physical Review paper in 1958.[4]

The acronym LASER follows the example of the MASER and stands for "Light Amplification by Stimulated Emission of Radiation. Gordon Gould, a graduate student at Columbia University working on optical and microwave spectroscopy independently proposed the idea of a Fabry Perot cavity and was the first to publicly use the term “laser.” [5]