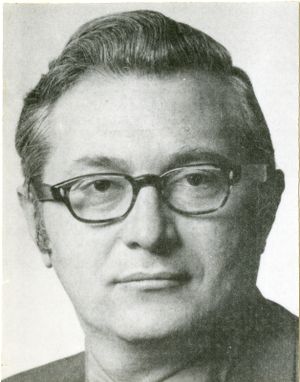 Anthony J. DeMaria has contributed greatly to the development of picosecond mode-locked lasers and high-powered lasers. He was the first person to demonstrate picosecond laser pulses. DeMaria's influential research in picosecond laser pulse physics has shaped the further study of molecular and atomic dynamics, nonlinear optics, and plasma physics.

He received his Bachelor's degree in Electrical Engineering from the University of Connecticut (1956), his Master's degree from the Hartford Graduate Center [affiliated with Rensselaer Polytechnic Institute] (1960), and his PhD in Engineering Physics from the University of Connecticut (1965). He joined the United Technologies Research Center (UTRC) in 1960, where he remained until 1994. DeMaria served as UTRC's Assistant Director of Research from 1981-1993. In 1994, DeMaria formed the DeMaria Electro-Optics Systems, Inc. (DEOS), where he served as chairman and CEO until 2001.

DeMaria holds 45 patents and his pioneering research in lasers has garnered him numerous awards and honors from the California Institute of Technology, the University of Connecticut, Renseselaer Polytechnic Institute, and the IEEE. He received the IEEE Morris N. Liebmann Memorial Award in 1980 "For contributions to the initiation and demonstration of the first picosecond optical pulse generator."

Retrieved from "https://ethw.org/w/index.php?title=Anthony_J._Demaria&oldid=166558"
Categories:
This page was last edited on 1 October 2018, at 18:17.
About ETHW
Policies and disclaimers