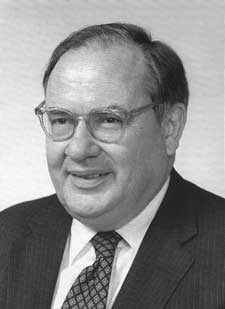 Arthur Schawlow was born in Mt. Vernon, New York, but moved to his mother’s native Canada as a young child. A precocious student, he read everything he could find in the local library about science. His family could not afford the tuition at the University of Toronto during the Depression, but Schawlow obtained a mathematics and physics scholarship. During World War II he taught physics to military personnel at the university.

After earning his doctorate in physics at the University of Toronto in 1949, Schawlow went to New York for postdoctoral research on microwaves with Charles Townes at Columbia University. Together they worked to apply the principles of amplifying electromagnetic waves to the shorter wavelengths of infrared and visible light. When Schawlow married Townes’ sister Aurelia in 1951, he had to leave Columbia because of an anti-nepotism policy. He took a job at Bell Labs and studied superconductivity there, continuing to work with Townes on their joint project whenever possible. The Light Amplification by Stimulated Emission of Radiation they developed, better known by its acronym of “laser,” operated at shorter wavelengths than the previously developed inventions. Schawlow and Townes received a U.S. patent for the laser in 1960. However, in 1987, The courts ruled that independent inventor Gordon Gould had conceived the laser in the fall of 1957, several months before Scawlow and Townes, and awarded Gould a patent.

In 1961 Schawlow accepted a position as a professor of physics at Stanford and became chairman of the department in 1966. He retired from Stanford in 1996. In addition to teaching and conducting research, he also enjoyed giving popular demonstrations of lasers. Although there were not many uses for the laser when it was first invented, they slowly became critical parts of countless scientific and commercial applications. Neither Schawlow nor Townes ever benefited financially from their invention, as they developed it while affiliated with Bell Labs. Schawlow shared the 1981 Nobel Prize in Physics with Nicolaas Bloembergen and Kai Siegbahn for their contributions to the development of laser spectroscopy.


In 1991, the NEC Corporation and the American Physical Society established the Arthur L. Schawlow Prize in Laser Science. The prize is awarded annually to "candidates who have made outstanding contributions to basic research using lasers."

Retrieved from "https://ethw.org/w/index.php?title=Arthur_L._Schawlow&oldid=154671"
Categories:
This page was last edited on 12 April 2017, at 13:51.
About ETHW
Policies and disclaimers