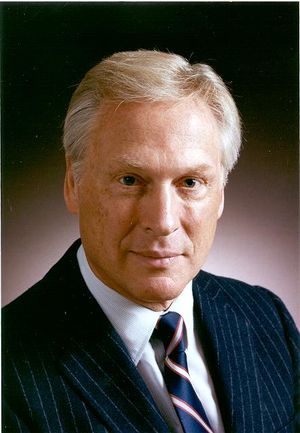 Malcolm R. Currie was born in 1927. Following flight training in the U.S. Navy, he obtained an A.B. degree in Physics and a Ph.D. degree in Engineering Physics from the University of California, Berkeley.

In 1973, Dr. Currie became Director (Under Secretary) of Defense Research and Engineering, at that time the third highest post in the U.S. Department of Defense, responsible for planning, managing, and guiding through Congress the weapons R&D and acquisition program from basic research through production decision. He was also chairman of the Intelligence Research and Development Council and National Armaments Director. He initiated and guided programs such as the Global Positioning Systems, Stealth, cruise missiles, F-18, turbine M-1 tank, and early smart weapons which constitute the foundation of our national security systems today.

Returning to Hughes in 1977 as President of the Hughes Missile Systems Group, Dr. Currie led the development of advanced IR and radar missile systems including AMRAAM. Later, as Executive Vice President of Hughes, following the acquisition by GM, he led implementation of the merger and also served as President and CEO of Delco Electronics, where he diversified Delco's product lines and transformed Delco from a captive supplier into a world competitive producer of high volume automobile electronics. In 1988, Dr. Currie became Chairman and CEO of Hughes and led its strategic diversification from defense in such areas as commercial satellite communications and direct broadcast satellites (DirecTV), where Hughes is now a world leader, and in air traffic control, private business network products and services and other applications of Hughes' electronics technologies. He also created a major new management philosophy and approach to productivity and product quality. Since retirement in 1992, Dr. Currie has served as Chairman of Project California, Chairman of the Board of Trustees of the University of Southern California, President of the American Institute of Aeronautics and Astronautics (AIAA). He is involved in entrepreneurial activities in electric vehicles and serves on the boards of a number of companies and government committees.

Dr. Currie is Member of National Academy of Engineering, and a Fellow of the IEEE, the American Association for the Advancement of Science, the British Aeronautical Society, and an Honorary Fellow of AIAA. His many recognitions include Phi Beta Kappa, Eta Kappa Nu Award as Nation's Outstanding Young Engineer (1958), the highest civilian awards in DoD, Intelligence and NASA, the AEA National Achievement Medal, Goddard Astronautics Award and French Legion of Honor. He was named as an Eminent Member of Eta Kappa Nu in 2001.

He resides in California, with his wife Barbara.

Dr. Currie was awarded the 1995 IEEE Founders Medal "For technical and managerial leadership in the electronics industry."