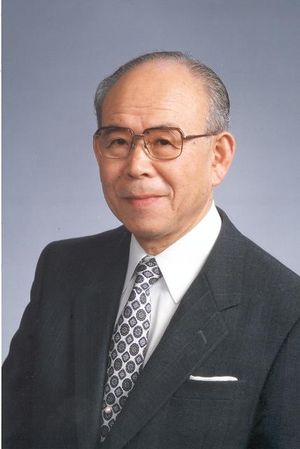 The persistent research efforts of Isamu Akasaki have resulted in the technology behind today’s high-brightness display lighting and advanced entertainment devices. During the late 1960s, Akasaki began researching solutions to the roadblocks that had prevented realization of high-performance blue LEDs and lasers. While many abandoned the challenge, his work using gallium nitride materials paid off in the 1990s with pioneering developments that led to high-brightness blue, green, and white LEDs and high-performance blue-violet semiconductor lasers. His work has influenced all subsequent developments on these LEDs and lasers and has enabled devices such as the blue-ray disc player, white illumination sources, and solid-state full-color displays. His first achievement important to the development of blue LEDs came in 1985 when he successfully grew high-quality single-crystal gallium nitride on sapphire substrates using a low-temperature buffer technology. His second was in 1989 when he used low-energy electron beam irradiation for p-type doping of gallium nitride. These achievements made at Nagoya University were necessary for further development of gallium nitride as the wide bandgap semiconductor system to enable the new light source. He then realized the first blue/ultraviolet gallium nitride LEDs. During the 1990s, Akasaki demonstrated stimulated emission in the ultraviolet region with optical excitation from gallium nitride at room temperature and electrically injected ultraviolet/purple-blue laser diodes. His inventions launched a new market for optoelectronics devices, and the Akasaki Institute at Nagoya University was founded in 2006 based on royalties from his patents.

Akasaki is an IEEE Fellow and 2011 recipient of the IEEE Edison Medal, “For seminal and pioneering contributions to the development of nitride-based semiconductor materials and optoelectronic devices, including visible wave length LEDs and lasers.” He is a professor with Meijo University’s Graduate School of Science and Technology and a Distinguished University Professor of Nagoya University, Japan. Akasaki was awarded the Nobel Prize in Physics in 2014 with Hiroshi Amano and Shuji Nakamura for the invention of blue light emitting diodes.

Retrieved from "https://ethw.org/w/index.php?title=Isamu_Akasaki&oldid=184567"
Categories:
This page was last edited on 7 April 2021, at 09:39.
About ETHW
Policies and disclaimers