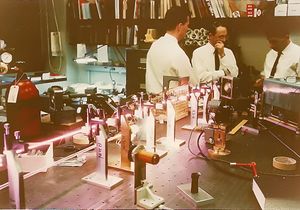 Left to right; Dane Rigden, Alan White and Bill Rigrod engaged in shop talk. The red HeNe on the bench is putting out about 80 milliwatts of coherent 632.8 nm light

A He-Ne laser is a gas discharge laser consisting of a mixture of He and Ne within in a small bore capillary tube, which is excited by a direct-current electrical discharge. The He-Ne laser was the first gas laser and it was invented by Javan, Bennet, and Harriot, in 1962 at Bell Labs. This first laser by Javan et. Al operated at a wavelength of 1152.3 nm in the infra-red. Soon after the Javan laser announcement, White and Rigden developed He-Ne laser operating at a wavelength of 632.8 nm.

Retrieved from "https://ethw.org/w/index.php?title=Helium-Neon_Laser&oldid=180133"
Categories:
This page was last edited on 30 May 2020, at 14:24.
About ETHW
Policies and disclaimers