2004 IEEE Conference on the History of Electronics[edit | edit source] 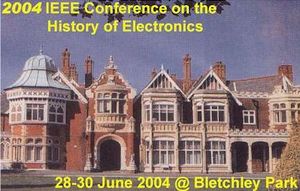 The 2004 IEEE Conference on the History of Electronics (CHE2004) was the fifth in a series of conferences sponsored by the IEEE History Committee and the IEEE History Center at Rutgers University. The profound role electronics have had in shaping the modern world, from the invention of the Fleming diode to the present, makes this an important topic of historical study.

This workshop was held at the historic Bletchley Park in the United Kingdom. This was an ideal site for such a meeting with conference facilities in the Victorian mansion and historical exhibits there and elsewhere in the park-like grounds. It was also an appropriate site, as it was here during World War II that the transition from electromechanical to electronic computing was made in the effort to decrypt intercepted messages. This is an IEEE Milestone, the citation states:

Approximately one hundred people attended the conference. These engineers, historians, and museum curators came from some twenty countries on five continents (Europe, Asia, Africa, and North and South America). More than fifty papers were presented in nineteen sessions over the three days of the conference. In addition, there was a panel discussion on the history of computer business, and there were historical tours of the Bletchley Park grounds and collections. The computer pioneer Sir Maurice Wilkes opened the conference with an overview of the beginnings of electronics. This conference again featured a worldwide Student History Paper Contest. A grant from the IEEE Foundation made it possible to provide travel funds for winners of the contest to participate in the conference. The conference concluded with an awards luncheon, honoring these student winners, where Bernard Finn of the Smithsonian Institution gave a talk on the artifacts of electronics history. The IEEE History Center would like to thank the IEEE Foundation and the EPSRC (the Engineering and Physical Sciences Research Council) for their support of the conference.

Other events were held by the Institution of Electrical Engineers and University College London to commemorate the Centenary of the Fleming Diode.

Akera, Atsushi, The Circulation of Knowledge and the Origins of the ENIAC: (Or, What Was and Was Not Innovative About the American Wartime Project)

Barnes, Susan, Transforming the Computer from a Calculating Machine Into a Global Telecommunication Network

Bauer, Arthur, The Significance of German Electronic Engineering in the 1930s

Davies, Hugh, Creative Explorations of the Glitch in Music

Dittmann, Frank, The Development of Power Electronics in Europe

Hong, Sungook, A History of the Regeneration Circuit: From Invention to Patent Litigation

Konstantinova, Anna, Alexander Popov – a Great Contributor to the Development of Wireless Communication

Landman, Bob, Electronics in the Development of Modern Medicine

Landy, Leigh, There’s Good News and There’s Bad News: The impact of new technologies on music since the arrival of household electricity and the phonograph including potential adventures to look forward to

Onifade, Debo, History of the Computer

Schmitt, Hans J., The Rise and Fall of the Vacuum-Tube

Stephens, Carlene E., Timekeeping in the Electronic Century: The Case of the Quartz Wristwatch

Wilkes, Maurice, Sir, The Origins and Growth of Electronic Engineering – a Personal View

A valuable part of the 2004 IEEE Conference on the History of Electronics was the participation, in the form of a poster session and oral presentations, of nine IEEE Student Members from around the world.

These students were the winners of a history paper competition sponsored by the IEEE Foundation. The contest, announced in 2003, asked students to research some topic in the history of electronics and to present their conclusions in a 10- to 20-page paper. From some two dozen papers received, eight papers were designated as Region winners or co-winners. The authors of these papers, along with the author of an outstanding honorable-mention paper, were invited to attend the conference, expenses paid.

Retrieved from "https://ethw.org/w/index.php?title=2004_IEEE_Conference_on_the_History_of_Electronics&oldid=195909"
Category:
This page was last edited on 20 October 2022, at 20:31.
About ETHW
Policies and disclaimers