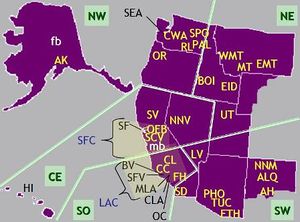 Region 6 (Western United States) was established in 1963 when AIEE and IRE merged to form IEEE.

Predecessor to Region 6 existed in AIEE; AIEE lists Districts 8, 9 and 15 containing Sections that are currently in Region 6.

Like other Regions, an annual expo, called WESCON, was formed and existed over 50 years - from 1951-2005 when it was dissolved. WESON alternated between the Los Angeles area and the Bay area. At its peak in the 1980's it drew approximately 50,000 attendees.

There are currently 35 Sections in the Region, listed by date of formation. Area and Council affliliation is listed in ().