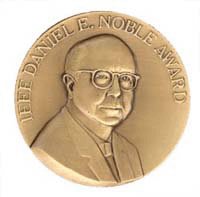 The award is named in honor of Dr. Daniel E. Noble, Executive Vice Chairman of the Board emeritus of Motorola. Dr. Noble is significantly known for the design and installation of the nation's first statewide two-way radio communications system. The system was the first in the world to use FM technology.

Dr. Daniel E. Noble was an IEEE Life Fellow. He was awarded the IEEE Edison Medal in 1978, "For leadership and innovation in meeting important public needs, especially in developing mobile communications and solid state electronics."

The IEEE Daniel E. Noble Award for Emerging Technologies was previously named the Morris N. Liebmann Award, which was originally established by the Institute of Radio Engineers in 1919 and then assumed by the IEEE in 1963 when the two organizations merged.

Recipient selection is administered by the Technical Field Awards Council of the IEEE Awards Board.

Not to be confused with the fellowship named Daniel E. Noble Fellowship that is jointly sponsored by the IEEE Vehicular Technology Society and Motorola, Inc.

Retrieved from "https://ethw.org/w/index.php?title=IEEE_Daniel_E._Noble_Award_for_Emerging_Technologies&oldid=179637"
Categories:
This page was last edited on 5 May 2020, at 19:54.
About ETHW
Policies and disclaimers