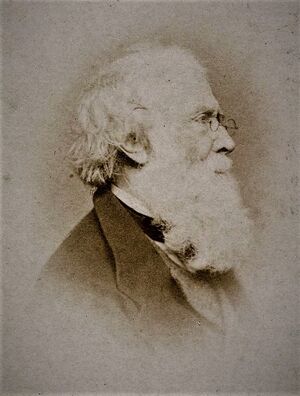 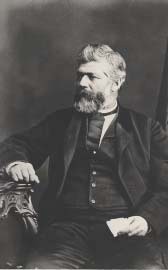 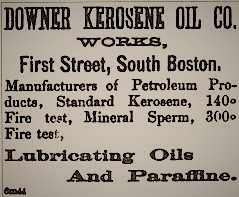 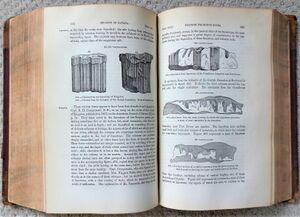 Fig. 4 Copy of the Report on the geology of Canada. Program Report from its commencement to 1863 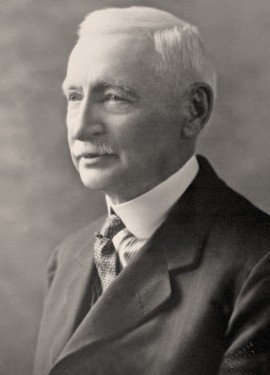 1820. A bituminous, pitch-like substance, known later as Albertite,[1] was described in Albert County, New Brunswick, Canada. The main deposit of this mineral was identified and mapped by geologist Abraham Pineo Gesner in 1839. Later in 1852, Gesner claimed the mining rights on the deposit upon right of discovery, but his attempt was unsuccessful.

1842. Sir William Edmonton Logan, director of the Geological survey of Canada, detected several petroleum outcrops in the hills of Gaspè, near the mouth of Saint Lawrence River, and located them on anticlines[2] (Fig. 1).

1845. In Nova Scotia, Abraham Pineo Gesner begun distillation experiments with organic material and coal, recognizing that "coal is evidently of vegetable origin, and consists chiefly of plants which have been subjected to great pressure, heat (volcanic), and chemical agencies through vast periods of time." Since he was convinced about the direct relation between volcanic heat and the making of coal, Gesner tried to reverse the process by heating the coal to produce liquid organic material.

Gesner traveled to the West Indies early in 1818 and visited the Pitch Lake[3] in Trinidad Island, locality named La Brea, and also examined the tar sands of Barbados. The knowledge he acquired when he was barely twenty years old revealed fundamental twenty-five years later when he distilled lamp oil from the Trinidad Pitch

1846. After have successfully tested the asphaltic substance from Albert County, New Brunswick, called Albertite,[4] Gessner lit lamps filled with oil distilled from that mineral as part of a public demonstration he held in Prince Edward Island and Halifax.

1850-1852. Gessner patented his process and the product under the name of Kerosene. The term he coined, which soon became universally synonymous with lamp fuel, was inspired by the Greek keros, wax, and elain, oil, but the ending "ene" was instead preferred, because the liquid was volatile like the more popular ethylene-turpentine derivate called camphene. The Trinidad pitch distilled by Gessner produced about 42 gallons of flammable liquid per ton, which was not much when compared with a similar pitch from Cuba that could yield up to 120 gallons per ton. The kerosene from the pitch released an unpleasant smell during the combustion the issue of the supply was soon raised. The pitch was a plastic, pasty and sticky material, difficult and expensive to carry via the means of transportation available at the time. On the other hand, the Canadian Albertite could yield 110 gallons of good oil per ton and the deposits were located at a more convenient distance. Unfortunately, even the supply of Albertite revealed to be a difficult business. There were problems related to mining rights, royalties, and the claims on the use of the feedstock for the same purpose from another competitor, which was awarded the right of exploitation at the expense of Gessner.

1851. Charles Nelson Tripp of Woodstock, Ontario, with his brother, joined other businessmen from Hamilton and New York City to establish the International Mining and Manufacturing Company for the purpose of producing asphalt from the Ontario gum beds situated in Enniskillen Township. This is recorded as the first petroleum company registered in North America; it explored for asphalt beds, petroleum and salt springs, manufactured oils, naphtha paints, burning fluids, varnishes and other related products.

1856 - 1858. Traces of the modern pattern of petroleum industry began to take shape in the province of Ontario. Two years before Edwin Laurentine Drake well in western Pennsylvania, James Miller Williams[5] was refining petroleum in Ontario (FIG. 2). Initially petroleum was obtained from hand-dug wells. Further fields were developed in the province’s southwestern peninsula, between lakes Huron and Erie, in the second half of the 19th century. This was the site of the world’s first integrated oil company, capable to explore, produce, refine and trade petroleum products on its own.

- The American John Shaw[6] sought as well for petroleum in Enniskillen Township in southwestern Ontario, confirming the high potential of the region.

- The Downer Kerosene Oil Company - a refiner and dealer from Boston, and leader for many years in the field of illuminating oils - distilled mineral oils from minerals of albertite, mined in the regions of New Brunswick, Canada (Fig. 3).

- A well drilled to search for water near Petrolia, Ontario, Canada, ended up in a petroleum gusher.

1860. The first natural gas well was drilled north of Trois Rivieres and put in production to fuel street lighting.

1861. The sum of Gessner's experience and pivotal contribution to fossils fuel refining technology applied to the industry of kerosene is included in the 1861 Treatise on Coal, Petroleum and other Distilled Oils.[7] The book remained a classic text on the subject for many years, and a second edition was printed in 1865. It represents the swansong for Gesner in the artificial illumination sector. In 1863, Gesner returned to Nova Scotia where he was offered the Chair of Natural History at Dalhousie University of Halifax.

1862. Petroleum production in Canada started to be systematically recorded for the first time by government authorities.

1863. Sir William Edmonton Logan, geologist in charge of the Canadian Geological Survey, and his assistants published the Report on the geology of Canada. Program Report from its commencement to 1863 in Toronto on behalf of the Geological Survey of Canada (FIG. 4).

Logan has pointed out the existence of a long anticlinal axis beginning at the Bay of Burlington, on Lake Ontario, and passing through London, Chatham and Amherstburg on Lake Saint Clair, that is to say, oriented from NE to SW, like the belt in which are found the sources of mineral oil in the United States. The anticlinal axis of Logan was declared by the authority a priority area for petroleum explorations. The Geological Survey investigations and discoveries was one of the earlier confirms to the rising petroleum sector about the importance of geology discipline.

1865. Theodore Rand wrote another important reference work for Canadian drillers, The Occurrence of Petroleum in Canada, in which he carefully details the location of the known anticlines in the country.

1866. The Thomas Sterry Hunt Petroleum section in the 1866 progress report of the Geological Survey of Canada was considered the most comprehensive and authoritative document on petroleum geology published during the 1860-1870 decade. He wrote his chapter merging and analyzing information pertaining to Canada and to the United States; the latter was retrieved in the works of prominent geologists like Lesley Andrews, Evans, Newberry, Vanuxem, and Henry Wurtz. His thesis was accompanied and enforced with copies of 58 well logs, additional groups of records of producing field, stratigraphic information obtained from previous authors. He also used elevations taken from railroad surveys and estimated from lake and river levels.

1870. By early 1870s, Canada was exporting crude and refined oils to Europe and had about 100 refineries in operation.

1880. The Imperial Oil[8] company was founded by Frederick Ardiel Fitzgerald of London, Ontario, with a capitalization of $500,000. Canada’s largest producer of crude oil, leading producer of natural gas, and largest refiner, the company opened several modern for a total of 16 plants.

1883. Discovery of natural gas at Langevin Siding in what is now south-eastern Alberta, Canada.

1885. Natural gas was discovered in shallow and easy to exploit wells in the Point-Aux-Trembles township.

1894. The eight-inch natural gas pipeline was laid from Essex County, Ontario, to Windsor; later, it was extended to a point near Detroit, Michigan, in 1895, and Toledo, Ohio, in 1898.

1902. Discovery of petroleum at Waterton, Alberta (now part of protected land of the local National Park).

1908. The Old Glory well spudded natural gas in the Bow Island, the first major discovery in Alberta. Construction of a 16-inch pipeline from southwest of Medicine Hat to Calgary began on April 22, 1912, and was completed in just 86 days. A second leg reached Lethbridge on July 12, 1912.

- Offshore drilling initiated from platform in shallow waters of Lake Erie in Canada.

1914. Archibald Wayne Dingman and his associates succeeded in wet gas discoveries and drilled the giant well Royalite No. 4 put Turner Valley, where it was experimented with results the first compressors[10] used in Canada to obtain liquid hydrocarbon from natural gas (FIG. 5 & 6).

1924-1929. The Natural Gas Commissioner for the Department of Mines in Ontario Col. Robert Bruce Harkness wrote his first contributions on the past and present of the petroleum industry in Canada. This author will become a point of reference for historians writing on the early Canada petroleum sector.

Logan, William E. 1863. Report on the geology of Canada. Program Report from its commencement to 1863. Toronto: Geological Survey of Canada.

Retrieved from "https://ethw.org/w/index.php?title=Chronology_of_the_early_Canadian_petroleum_history&oldid=186311"
Categories:
This page was last edited on 29 September 2021, at 13:28.
About ETHW
Policies and disclaimers