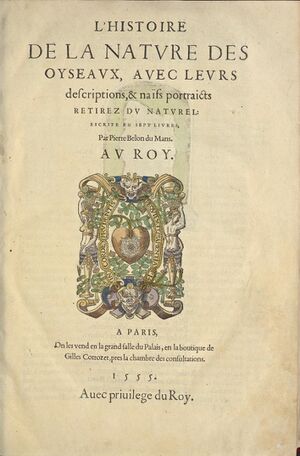 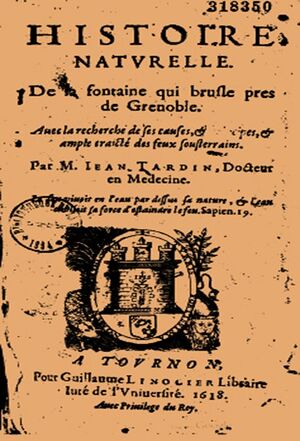 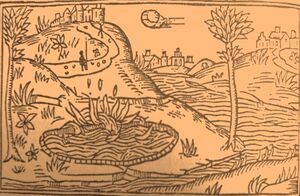 Fig. 2b Representation on the burning fountain 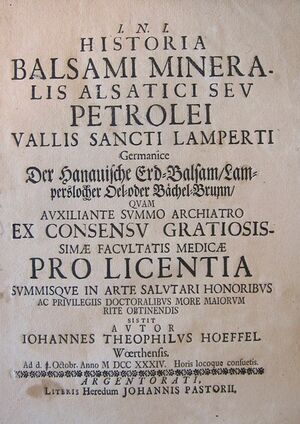 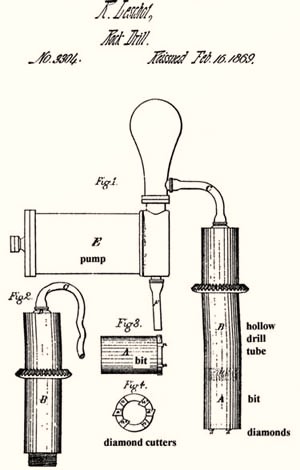 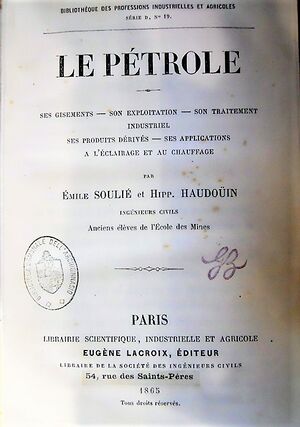 1625. In Strasbourg, pharmacist Johannes Volck published the first complete account on the petroleum seepages of Pechelbronn (Description of the Hanau earth balsam, petroleum and soft agate stone: belonging to the most nobly born count Johan Reinhard, Count of Hanau and Zweibrücken, Dorff, Lampersloch. Together with its virtue, power and efficacy, which various authors ascribe to it, but carefully prepared, tested and found suitable for many purposes: published for the use and the good of all by Johan Volck. Strasburg, Jezua Rihel, 1625) and dedicate a section on the vantages of refining the crude mineral into lighter products (FIG.3).

1734. Jean Théophile Hoeffel completed a thesis in medicine at Strasbourg (FIG.4). He described the thick, tarry bituminous substance floating on top of a petroleum spring nearby an oil-sand land. He extracted some petroleum products, including something similar to kerosene through distillation in his laboratory.

1746. King Louis XV granted an exploration and mining concession in the lands of the then Baechel-Brunn (Pechelbronn) to Louis Pierre Ancillon de la Sablonnière and Jean d’Amascéne Eyrénis. They formed a firm and issued 40 shares to finance the operation. This might be regarded as the archetype of the first mining company having its core business in petroleum.

De la Sablonnière worked as interpreter for the French ambassador in Switzerland, while Eyrénis was son of Eyrén Eyrénis, who had developed a bitumen mine in the Val Treves (Switzerland) years earlier. Their first pit was about 30 feet deep; the following digs reached 100 to 1,500 feet by 1765. Oil sands were carried to the surface and mixed with boiling water: through this process, bitumen filtered out the sands, skimmed from waters and eventually collected in jars.

1799. Philippe Le Bon[1] is awarded the first patent for gas illumination through his device named Thermolamp.

1813. At Pechelbronn, 140 vertical, shallow, manual wells were dug in the oil sands mines that were developed with traditional shafts and tunnels since early 18th century. The wells were not finalized to produce bitumen but rather to support the development of oil sands mining in the historic manner.

1838. Asphalt and tar are used to pave the main streets of Paris.

1856. The earliest and seminal thesis on the measurement of the flow rate of liquids in porous media dates back to 1856, when the French engineer Henry Philibert Gaspard Darcy (1803-1858), a public servant employed at the Corps des Ponts, des Eaux et des Forêts (Corps of Bridges, Waters and Forests) published the results of his experiments on the flow of water through beds of sand in Appendix D of his work Fontaines publiques de la ville de Dijon.

Darcy’s Law describes the linear movement of fluids in laminar flow through a porous media. It represents one of the most important principles in hydraulic engineering and finds application in the study of petroleum formations and calculations for the estimation of petroleum recovery volumes from reservoir rocks.

1860s. Following the first crude and refined oil shipments from the USA to the harbor of Le Havre, French scientists began to pay more attention to petroleum. Most of their assumptions and interpretations continued in the European tradition of mining studies; other scholars modified, sometimes reluctantly, their thoughts following the new concepts which had arisen in more developed North America oil regions (Fig.5).

1862. Transmission of the Canadian Geological Survey's ideas on petroleum geology to France by M. Gauldree-Boileau, a mining engineer and French Consul in Canada. His first article on this matter was published in the mining leading journal in Europe Annates des Mines.

1863. Three of the largest French refineries, located near the port of Marseilles began to process crude oil imported from North America.

- The diamond core-drill is patented by Rodolphe Leschot, French Engineer. After the initial success of the device, he then patented in 1869 the improved version (Fig.6).

1865. In Paris, Emile Soulie and Hippolite Haudouin published Le petrole: ses gisements, son exploitation, son traitement industriel, ses produits derives, ses applications a l'eclairage et au chauffage. This was the most significant treatise published in Europe: it reveals the interpretation of the petroleum industry as an integrated production chain, and details the state of the art of petroleum technology, science and engineering in France (Fig.7).

1866. Chemist Marcelin Berthelot,[2] Professor in the College de France, member of the Académie des Sciences, between 1861 and 1870 worked to the synthesis of hydrocarbons. In 1866 he formulated a chemical theory of the organic origin of petroleum.

1867. Henri Coquand,[3] the most acknowledged expert in Cretaceous paleontology and stratigraphy in France, published his Sur les gites de petrole de la Valachie et de la Moldavie et sur l'age des terrains qui les contiennent. This essay is the first modern analysis on the geology of the Romanian petroleum regions, which much contributed to the development of micropaleontology applied to petroleum finding.

1879. The Fauvelle water-injection drilling system was patented and commercialized.

1889. Recovery of conventional crude petroleum in Pechelbronn began via mechanical drilling and pumping. Mining also continued into the 20th century with shafts. The maximum depth reached was 13,000 feet. Between 1745 and 1977, when the operations stopped, about 43% of the oil in place was recovered by mining, and 17% was recovered by drilling. The remaining 40 percent was classified unrecoverable.

The organization of such official and specialized event was mirror of the maturity and complexity of the global petroleum industry at the turn of the new century. Prior to this initiative, petroleum and gas were discussed as side topics in geology, engineering and chemistry conferences often only at a regional level. In early 1900, professional titles like petroleum geologist, engineer and chemist were not yet acknowledged by academia and in corporate settings. On the other hand, cadres of professionals and academics specializing in petroleum (then called “Petroleum Experts”) were growing and looking for an international forum to discuss, share, learn, and enrich knowledge and scholarship.

The Congress concluded with the establishment of a permanent Central Committee for the International Petroleum Congress, which was based in Paris with the aim to coordinate the organization of the future Congresse.

1919. The first Geophysical Institute is established at the University of Strasburg, which awarded the degree “Diploma of Geophysical Engineer”.

1921. In Paris it was possible to earn a “Certificate of Geophysicist”. Its curriculum covered a range of disciplines ranging from geodesy, seismology, terrestrial magnetism and electricity, transmission of electromagnetic waves in atmosphere and solid earth, meteorology, aerology, radiation, and ionization of atmosphere.

1924. The German shares of the Turkish Petroleum Company after the San Remo Conference were transferred to French government control. These assets would have converged in the same year of the constitution of the Compagnie Française des Pétroles, CFP (Fig. 8).

1925. The French engineer Eugene Jules Houdry (1892-1962) ran experiments on the use of catalysts agents to improve the cracking process starting. In the United States he worked for Socony Vacuum Oil (1930) and then Sun Oil (1932). By using silica and alumina-based catalysts, he demonstrated that not only could more gasoline be produced from petroleum without the use of risky and expensive high pressures, but also that is possible to reach higher octane rating and more efficient combustion.

Retrieved from "https://ethw.org/w/index.php?title=Chronology_of_the_early_French_petroleum_history&oldid=186212"
Categories:
This page was last edited on 17 September 2021, at 18:15.
About ETHW
Policies and disclaimers