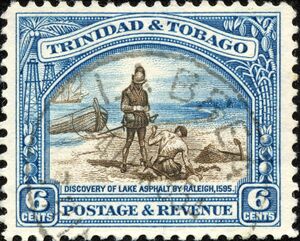 Fig. 1 Celebrative stamp of the discovery of the Pitch Lake by Raleigh in 1595 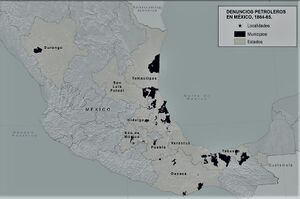 Fig. 2 Map of the concessions granted by the Secreteria de Fomento in 1865 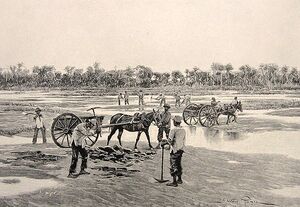 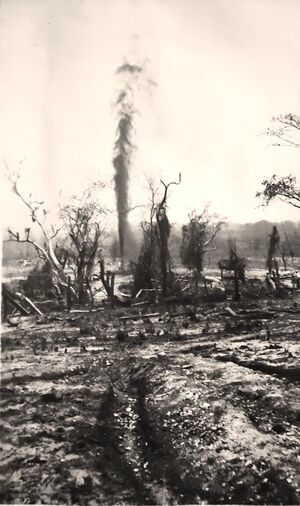 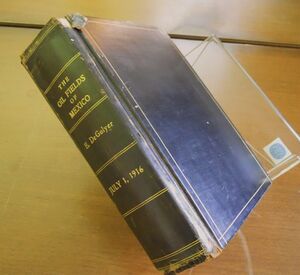 Fig. 6 Typewritten copy of the 1916 The Oil Fields of Mexico at the Everette Lee DeGolyer Library, Southern Methodist University.

1595. Sir Walter Raleigh discovered a pitch and asphalt Lake exploring Trinidad Island. Raleigh himself used the same asphalt to caulk his battered ship. Since then, numerous research investigations were conducted on the use and composition of the thick bitumen of the lake (Fig. 1).

1783. In Mexico the new Codigo de Mineria (Mining Code) became effective, which listed an article dedicated to the exploitation of the petroleum outcrops distributed mainly in the west of the country.

1861. The first petroleum wells dug by hand in Peru are completed under the direction of the Scottish well driller Farrier near the area of Zorritos, north or La Brea-Parinas.

1863. The landowner Manuel Gil y Sáenz localized the San Fernando, Mexico, mina de petroleo - a group of chapopoteras[1] - and collected the bitumen. He sent samples to New York for chemical analysis, which led to the first U.S. study on Mexican petroleum.

1864-65. The Secreteria de Fomento (Secretariat for the Development) of the Emperor Maximiliano of Mexico considered the production of petroleum a core business for the energy sector of the country. It began a massive policy of oil concession distribution among national and foreigner investors (Fig.2).

- La Compania de Kerosine Jujena finds petroleum in the vicinity of the Laguna named La Brea - Lagoon of Tar on the east side of the town of Salta, Argentina.

1867. In Peru, the Pennsylvanian wildcatter A. E. Prentice used a Leschot type diamond drill and discovered petroleum at only 146 feet in the Zorritos field. The daily production is 60-barrels of petroleum.

1868. The American engineer, J. B. Chichester introduced gas for house and public illumination in Mexico City after successfully converting a long-idle and never-used gas plant to the purification and compression process.

1883. John C. F. Randolph, U.S. mining engineer, wrote the Report on petroleum in Mexico upon commission from private investors. This source is the first modern written technical report on petroleum the petroleum possibilities of northern Veracruz.

1884. In Mexico, the federal Mining Code is adopted, which alters mining's legal traditions by linking access to the subsoil with ownership of the surface.

1885. The first sample of hydrocarbon was collected on the banks of the Azero River, Department of Chuquisaca by the explorer Ignazio Prudencio.

1887. The first petroleum production in Argentina is secured in the province of Mendoza, on the Chilean border: about 55,000 barrels are produced that year.

1888. The Trinidad government awarded a contract to industrially develop the Pitch Lake. Since this moment began the large scale export of pitch from the island (Fig. 3).

1893. A shipment of crude petroleum is sent from Peru to California. It was less expensive to ship it there than to receive it by rail and carriages from the East coast. There was no stiff tariff against Peruvian crude, as the Peruvian state itself did not place custom duties on American crude or refined oils.

1907. The first commercial petroleum discovery in Argentina achieved by a government team. It opens up the production of the giant Comodoro Rivadavia field. Jose Fuchs,[2] near the homonymous city Comodora Rivadavia, stuck petroleum at 530 meters (Fig. 4).

1910. The UK owned company Mexican Eagle found a gusher at Potrero del Llano, well number 4, near Veracruz, in the land that will named Mexico’s Golden Lane-Faja de Oro because its petroleum richness (Fig. 5).

1911. The well Ancon No. 1 is drilled by the Anglo-Ecuadorian Oilfields Ltd. This was the first mechanically drilled well (1500 feet of depth), in the small state of Ecuador. Until then crude was recovered from hand-dug pits since 1700s. Early Native Americans in that area had long known of oil seeps. They dug pits and allowed petroleum mixed water to flow into them. After the evaporation of water upon the exposure to the sun, they used it in its semisolid form to caulk their canoes.

1914. American petroleum businesses abroad are organized in refining investments in Argentina and Austria, and shares, leases or concessions in Russia, Colombia, Poland and Argentina. The core production and imports of the country are almost entirely focused in Mexico and Rumania.

1915. The International Petroleum Company, a Standard Oil Company of New Jersey affiliate, was established to explore and develop new petroleum lands in Peru.

1916. Petroleum was known to exist in Bolivia since 1600s, but serious exploration did not begin until 1916. In that year the government granted large concessions to foreigner investors (Braden company). In 1920, it granted further important concessions to the Richmond Levering and Company and the entrepreneur Jacobo Backus. The Backus concession was sought by Royal Dutch Shell but abandoned in 1924 for lack of results. The Braden and Richmond concessions were taken over by Standard Oil of New Jersey, which managed to bypass a 1921 law limiting new concessions extensions to 100,000 hectares. Standard aim was to produce oil from fields discovered in the southeastern part of the country and export it via pipeline to the Parana River in Argentina.

- Everette DeGolyer published a limited number of copies of the 900 hundred-page manual The Oil Fields of Mexico with Particular Reference to the Fields of the Tampico-Tuxpam Region, by E. DeGolyer, chief geologist, Mexican Eagle Oil Co., dated New York, 1 July 1916. The work is a fundamental resource for the history of petroleum in Mexico since it recollected 50 years of scientific, technical and economic data and information (Fig. 6).

1917. Cabinas, Venezuela’s first giant field and part of the Bolivar Coastal Complex, was discovered and put in production.

- The Brazilian government’s Geographical and Mineralogical Service established the first petroleum exploration department, but there were no notable successes.

- The new Mexican Constitution, Article 27, affirms that the direct ownership of subsoil deposits belongs to the nation and that this right is “inalienable and imprescriptible”. It stated that only Mexicans and Mexican corporations could acquire land or concessions. Similar rights may be extended to foreigners who agreed to consider themselves nationals in the exercise of their right and not to invoke the protection of their governments.

1937. The Bolivian government expropriated all the Standard Oil of New Jersey’s petroleum concessions and installments in the country without any sort of refund or compensation. The Yacimentos Petroleros Fiscales Bolivianos (YPFB) state owned company is established (Fig. 8).

1938. On April 29, in Brazil President Getúlio Vargas established the Conselho Nacional do Petróleo (CNP; National Petroleum Council), via Law No. 395, to implement national policies of control and administration for the development of the petroleum sector in Brazil.

Retrieved from "https://ethw.org/w/index.php?title=Chronology_of_the_early_Latin_American_petroleum_history&oldid=186210"
Categories:
This page was last edited on 17 September 2021, at 18:14.
About ETHW
Policies and disclaimers