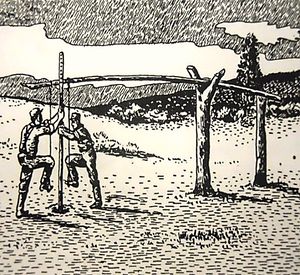 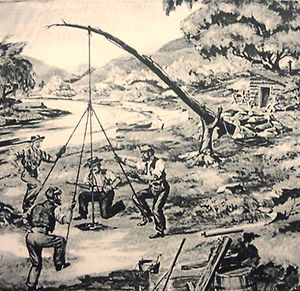 Rudimental spring pole system arranged with materials procured in field. The percussion is assisted by the rotation movement given to the chisel by the driller. 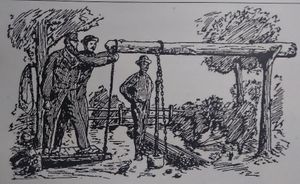 Spring pole moved by mean of the teeter-totter platform 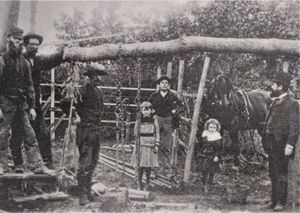 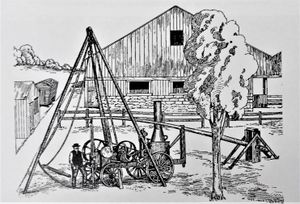 Manual percussive drilling was used for drilling at more substantial depths, and especially for advancing the bore hole through harder rocks than it was possible to reach by hand digging. Hand digging placed workers at the bottom of the well with shovels, pickaxes and buckets and it was very risky to dig over 250-330 feet (80-100 meters) because of the risk of structural failures, heat, and lack of oxygen.

In the United States, early percussion drilling for salt brine deposits mixed with petroleum are recorded at the beginning of the 19th century. Excavations were propelled by a man kicking into a rope loop or jumping on a spring-loaded platform.

Through this movement, bamboo or wood rods attached on the lower side a chisel-like cast-iron drill bit (the cutting tool) were raised and dropped on the solid rock. Progress was slow depending on the hardness of the rock. A day’s drilling might have advanced the borehole a foot. Despite that, this system called spring-pole dominated petroleum finding in North America until the late 1850s.

The shift from salt to petroleum happened largely because the spring pole technology was so well diffused and rooted. The practice of drilling became a profession composed of full time and skilled drillers and the early petroleum harvesting and distillation industry begun from these salt wells that were “contaminated” with petroleum. In the States, the transfer of salt drilling technologies to a petroleum landmark region was the Kanawha Valley.[1] In a wider geographical contest, it is possible to localize the petroleum-to-salt paradigm in the Appalachian region, particularly in West Virginia and western Pennsylvania, and to a lesser extent in northwest Ohio and southern Ontario.

The early records about the spring pole used in salt finding with contamination of oil reports approximately 2.5-inch diameter percussion bits attached to a spring pole by a rope which stabbed up and down in the soil. The completion of a well was implemented by using a wood casing (hollow trunk) into the hole to prevent loss of mineral rising in the borehole. The spring pole rig consisted of a tough, springy young log, 40 to 50 feet long, anchored at an angle to a firm locking base (made of stones and ropes) called a dead man. The tip of the log was above the hole, and the drilling tools were suspended by a rope from the tip of the log. Other ropes were attached to the tip of the pole, and when the well drillers pulled down on these ropes, the drilling tools fell into the hole. When they released the rope, the spring of the pole lifted the tools. The spring pole generally was anchored at an angle of about 30 degrees, but sometimes it was placed in an almost horizontal position. Originally the workmen pulled it down on hand ropes attached to the pole, but they soon used stirrup loops on the ropes and kicked it down.

During its lifespan, the basic mechanic principle of the spring pole remained the same, but various changes were made in its mode of operation. For example, the bit/chisel used for percussive drilling took the form of an auger used to implement a rotation system by means of the drilling string, the cable often made of manila/hemp rope used in place of the wooden rods. The rotation motion was effected by hand twisting of the iron/wood rods (or rope). Another advancement in the spring pole technology was the devising of the teeter-totter platform with one end of the platform suspended by ropes from the spring-pole. By shifting their stance back and forth, the workmen used the teetering platform to operate the spring-pole.

Various methods of attaching winches and cables to lift the tools were also conceived. Throughout the years, the spring pole was also used together with the steel drilling bit, the drive-pipe, and even the early packer, an artifact used to shut off unwanted flow of fluid into the well.

In the 1830s, drilling apparatuses using spring poles could be said to be “portable” in the sense that the spring pole and its impediments could be disassembled and re-erected at a new site. Heavy metal and hard wood tools were difficult to carry just by mean of human and animal labor into inaccessible lands, often not crossed by real roads.

The spring pole system also found use in some petroleum fields in Romania. The rod was balanced on a samson post, resembling the T-shape of a walking beam. At the top of the rod, the worker kicked down the drill string (rope or chain, and the chisel). The bottom of the rod used a stone to counterbalance the kicking of the worker and secured to the dead man with a rope. The rope was long enough to allow the oscillatory motion of the rod. At the end of the run, the recoil imposed by the rope facilitated the ascension of the chisel. This calculated use of counterweights allowed the spring pole to be operated by just a single worker.

The spring pole rig was still used in the early oil industry until the early 1860s before it was replaced by the most rapid and efficient steam-powered derrick-mounted mechanical systems working by means of walking beam. Hybrid-mechanical spring pole systems were patented by the 1870s.

A tripod derrick, a common mast in the Canadian field, and then widely used in eastern Europe and Australia, was powered by a vertical boiler steam engine. The entire unit was compact and portable on wheels. The spring pole was attached to the removable dead man anchored to the ground. A rigid beam pivoted on a samson post attached at the end of the rig chassis permitted the entire unit to be wheel mounted.

Henry, J. T. The early and later history of petroleum: with authentic facts in regard to its development in western Pennsylvania : the oil fields of Europe and America, gas wells, spiritual wells, oil well shafts, petroleum products, oil companies, pipe line statistics, early modes of transportation, flowing wells of 1861 to 1864, pit hole in 1855, the lubricating oil district, etc. : also, statistics of product, export, and consumption, with prices of oil from 1859 to 1872, & c, & c : the Parkers' and Butler County oil fields : also, life sketches of pioneer and prominent operators : with the refining capacity of the United States. Philadelphia: J.B. Rodgers Co., Printers, 1873.