(Redirected from Barrel (Unit of measurement)) 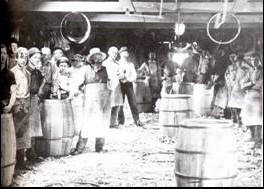 Heisman Barrelworks workshop in Titusville, PA, 1880s. A coopersmith was a respected profession in the oil regions and was considered a highly skilled workforce. 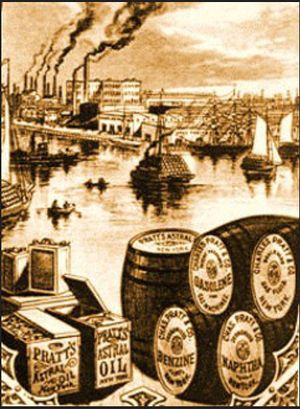 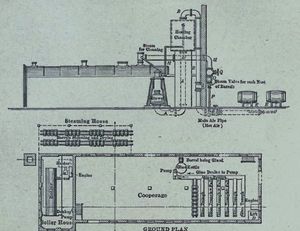 Barrel drying with hot air. The nozzles are inserted into the glued barrels, and the dry air carries off the water, leaving a coating of glue inside the barrel. “Bacon and Hamor, 1916”. 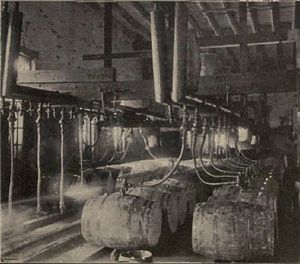 Barrel filling in the refinery. The Penflex automatic barrel filler fitted with 11/4 inch flexible steel hose. In “Bacon and Hamor, 1916”.

A barrel (bbl) is defined a non-SI Metric System Unit[2] typically used to measure the volume of liquid hydrocarbons. One-barrel weighs 42 U.S. gallons, equal to 0.159 cubic meters; 158.99 litres; or, 0.137 ton (the latter depends on the density of the petroleum).

The 40-gallon barrel watertight tierce became a standard container in the early 19th century for shipping everything from salmon, herring, molasses, soaps, wine, and whale oil. By 1860, the exponential growth of petroleum production generated a massive consumption of wooden tierces, whiskey barrels, and casks of several different sizes; historical accounts report 300-lb. barrels hauled by carriages and rail to Pittsburg and Philadelphia. Since it was the most diffused and available in several trade activities, the 40-gallon barrel became soon, for a matter of custom, the size of reference in the oil fields.

The early 42-gallon barrel found wide use in the petroleum industry of West Virginia and Pennsylvania, soon becoming the preferred standard because the additional two gallon capacity compensated for the reduction in volume due to the evaporation and losses suffered during the transportation from the well to the refinery. Towards the end of the Civil War, the Union authorities attempted to order in this size and at the same time, profit from the situation. The government was in search of funds to sustain the heavy war expenses and imposed a tax on the petroleum barrels. The tariff was set at one dollar on each barrel of petroleum weighing up to 45 gallons. An additional dollar was taxed for barrels with larger sizes.

In 1866, the field-to-refinery and refinery-to-market trade chain was eventually standardized when more than two dozen leading oil producing companies from the eastern states, guided by Pennsylvanians, agreed to commercialize petroleum by the gallon rather than the odd sizes of the package (barrels or tin cans), and the 42-gallon was adopted as the standard size. The 42-gallon oil barrel standard was acknowledged by the Petroleum Producers Association in 1872, and ten years later made official in the federal terminology through the U.S. Geological Survey[3] and the U.S. Bureau of Mines[4] in 1882.

The refined oils (lamp fuel, gasoline, naphtha, etc.) were commercialized in many different formats and packages, but the 42-gallon became the only standard barrel used in the refineries. The Standard Oil Company of John Rockefeller decided to paint all the barrels carrying its refined kerosene in blue. The adoption of the blue barrel (abbreviated bbl, the acronym still in use in the industry) was a successful marketing strategy.

While the U.S. industry adopted the barrel-size as standard, in the national petroleum trade market, the gallon (3.78 litres) was still the common unit of measurement. On the other hand, in the international markets, petroleum bulk was weighed in tons (1 ton = 264.17 US gallons). Occasionally, petroleum shipments were measured in Imperial Gallons (1 Imperial Gallon = US 1.20 gallon = 4.54 litres) in the British and European literature from the 1860s and 1870s

At the turn of the 20th century, the production of barrels was not just a business run in the proximity of the oil fields by a master cooper's laboratory, but rather it evolved into a large-scale standardized industry. The preparation of high quality barrels was an important step in the marketing of refined and distilled products. Petroleum barrels had to be perfectly tight and free from alien matter which may contaminate the product shipped inside, therefore it was necessary that they were properly driven, cleaned, glued and dried. The drying subsequent to gluing was the most difficult part of the process, since the glue was likely to break if dried too rapidly and mildew if dried too slowly.

Old fashioned practices and artifacts like a barrel-laden river barge or teamster's wagon were distant memories from the pioneering years of the petroleum industry. The 42-barrel became the global standard used to refer to petroleum prices and production rates even though oil was moved with tankers and pipelines. The average heat energy content of petroleum is 5,800,000 BTUs per barrel, which corresponds to 6.1×109 joules per barrel (or 0.145×109 joules per gallon). However, in the metric system, petroleum is also measured by the metric ton (1000 kg). One metric ton of oil is 7.22 barrels of petroleum and it contains 44×109 joules of energy. Today the barrel designation continues to be used, and while physical barrels are rarely used in the industry, the 42-gallon standard remains as an official, and iconic, unit of measurement in the petroleum sector.