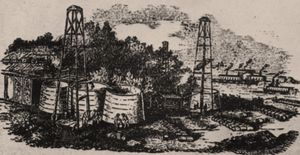 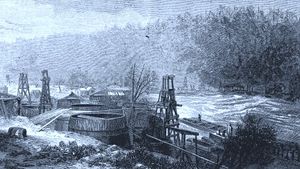 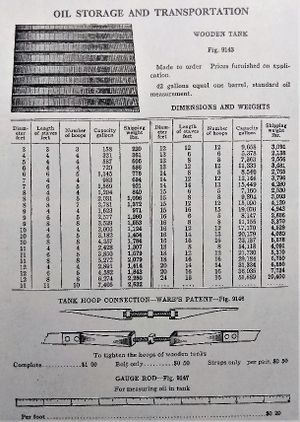 Technical chart of the wooden tank sold by the ‘Oil Well Supply Co’. Depending on the size, this model could store from 9,659 to 51889 gallons of crude. From ‘Illustrated catalogue of the Oil Well Supply Co….’, 1892. 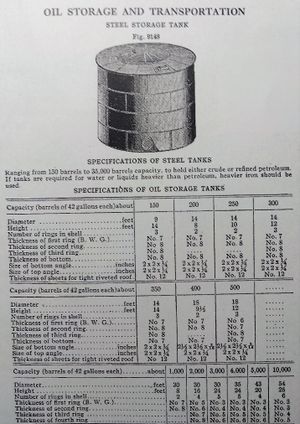 Riveted steel storage tank sold by the ‘Oil Well Supply Co’. This model could hold up to 35,000 barrels of petroleum or refined products. From ‘Illustrated catalogue of the Oil Well Supply Co….’, 1892.

In North America petroleum fields in the late 1850s were introduced to new types of storage tanks. These were wooden or metal-riveted tanks, above ground vertically displaced, truncated cone shaped, and built of various sizes.

The smaller ones were called day tanks. Located in the proximity of the producing well, these were utilized for storing petroleum collected daily or weekly, depending by the yield of the well. Larger tanks generally built closer to transportation hubs, such as railways and river ports, stored oil as a stage in the transportation to refineries. In Ontario, where the geological conditions were favourable, it was possible to build semi-underground storage tanks made of horizontal rings of wood to resist lateral earth pressures and attendant earth slides.

Daily tanks served to receive oil and water from one or more wells and to drain off water associated with petroleum production. In the 1860s tanks were built only out of wood, and during the early 1870s, the first riveted wrought iron[1] tanks were introduced both in the U.S. and Canada.

Wooden and arc-welded mild steel tanks existed in petroleum fields until the early 20th century, while in the refineries metal ones were mostly used.

Tanks were not only used to collect petroleum to separate from water, but also served to remove gases evaporating from petroleum. The first rudimentary separators were introduced in the U.S. and Canada between 1863 and 1865. These early simple devices were closed containers mounted over the storage tanks and built to maintain atmospheric pressure. As the oil flowed slowly from the supply pipes into the tanks, the petroleum and gas separated spontaneously, the former to the bottom and the latter towards the top. In a second stage, petroleum was separated from the water, and the gas conveyed to another storage. Separators captured and supplied cheap gas on-site to fuel the boilers used to move the rigs and pump the well and were also very helpful to prevent accidental fires often caused by sudden gas leaking.

At the turn of the 20th century, high pressure separators were introduced, being more efficient in the removal of higher percentages of gas.

The need to process larger and larger production rates, often under pressure, made it necessary to place the separator at ground level and to devise a fluid level control system. In 1904 the first pressurized separator was introduced, able to operate at a pressure of 10 bars. Very soon it was recognized that the volume of produced oil was larger if the separator was placed upstream with respect to the storage tank instead of conveying the well stream directly into the tank. In the early 20th century, high pressure storage tanks were designed for storing volatile liquids such as gasoline and liquefied petroleum gases (LPG), which generate high internal pressures, and commonly built in spherical shape.

Ball, Norman Roger. “Petroleum Technology in Ontario During the 1860s.” Toronto Institute for the History and Philosophy of Science and Technology. MA thesis, University of Toronto, 1972.

Peckham, Stephen Farnum. 1884. Report on the production, technology, and uses of petroleum and its products. Washington: Government Printing Office.