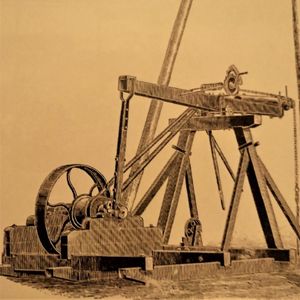 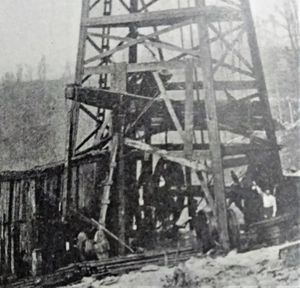 Walking beam working down a derrick in Pennsylvania, c. 1860s 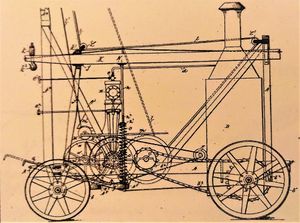 Portable percussion drilling machine. The walking beam was moved by the boiler mounted on the same chassis.

A walking beam is an oscillating beam from which drilling tools derive their reciprocating motion. The beams are composed of a timber and metal structure in the form of the letter T, the top part of which was made to pivot on the other. One end of the upper beam hangs directly over the mouth of the well, which was attached to a rope or rods from which the drilling tools were suspended. The other end was connected to the driving gear. The walking beam was the fundamental component in the percussion system.

As early as 1823, there is a record of a walking beam used for drilling waters in Louisiana, and this may have been also a case of technology transfer from France where this tool was mostly used to drilling artesian wells. The first use of the walking beam for drilling petroleum in North America is uncertain, but most likely the earliest uses took place after the mid-1850s. In these years, it was applied in the rigs of the Pennsylvanian salt brine wells that also yielded petroleum.

The walking beam, as opposed to the spring pole system, could be connected to a horse treadmill or a circular whim. The early drilling rigs used for petroleum were steam powered through a an eccentric belt drive band wheel.

The mechanism served as the walking beam set on a samson post (this gave the signature “T” shape) to transmit the rising-dropping motion to the borehole, vertical-moving, equipment. Cable tools were suspended on the manila rope line (the American System), or wooden drilling rods (Canadian System). When the machinery was activated, the oscillating motion was transmitted to the walking beam, which in turn imparted a reciprocating motion to the drilling bit (chisel), the latter thus struck the ground to be drilled at set intervals given by the speed distributed through the spinning gears. The rising and falling of the walking beam at the surface imparted a vibratory action to the suspended drilling line that caused the line to alternately stretch and contract. With this movement, the drilling tools would lash out several feet and strike the bottom of the drill hole with great magnitude. The force generated by the firm and consistent hammering of the walking beam exceeded the secular perforation speed and depth limits imposed by manual and mechanically assisted (spring pole) systems.

With the further developments of the walking beam in the 1860s, skid mounted drilling rigs could be easily dragged from site to site. In the 1890s, further adaptations allowed the manufacture of walking beams adapted to work on portable percussion drilling machines.

Thompson, Arthur Beeby. Petroleum mining and oil-field development: a guide to the exploration of petroleum lands, and a study of the engineering problems connected with the winning of petroleum, including statistical data of important oil-fields, notes on the origin and distribution of petroleum, and a description of the methods of utilising oil and gas fuels. New York: Van Nostrand, 1910.