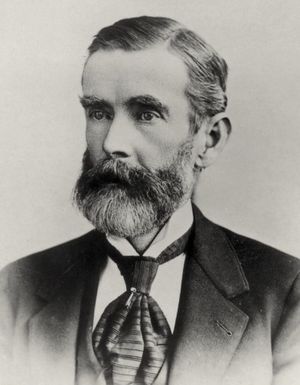 Carll, an early petroleum scientist who implemented systematic field and laboratory work on the nature of petroleum deposits. 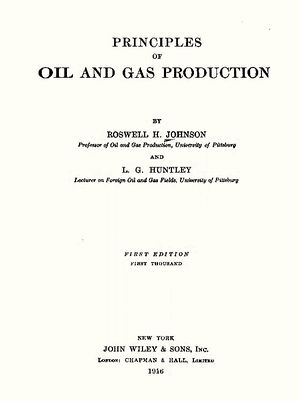 The wealth of knowledge, know-how, methodologies and practices which matured in the North American and European petroleum fields during the latter half of the 19th century converged to form the autonomous and authoritative discipline now refer to as Petroleum Engineering in the 1910s. Despite the great business and interest petroleum sparked since the late 1850s (tool making, heavy machinery for petroleum fields and refineries, logistic infrastructures, means of transportation, etc.),[1] the epochal shift in the global fuels market, and the development of new classes of workers and industrial paradigms, the technology of petroleum was developed in the oil fields still as a system of practices and uses by engineers and technologists educated in other fields (e.g., geology, mining, civil, and mechanical engineering).

John Franklin Carll (1828-1904)[2] is often acknowledged as the first petroleum engineer after his achievements from his 15 years of service at the Second Geological Survey of Pennsylvania.[3] He conceived and designed equipment for petroleum drilling, understood that oil could be produced from porous sandstone, defined the concept of an oil pool, and devised a method to estimate the quantity of oil in place, and also the importance of water-flooding for increasing the recovery factor (the task of which today is in charge the Reservoir Engineer).[4] Carll succeeded also to persuade the oil drillers on the importance to have staff assigned at the drill site to collect and record data on daily reports for the use of the office technicians.

In 1877, before his recommendations, more than 4000 wells had already been drilled in the states of New York, West Virginia, and Pennsylvania, but drilling reports of less than 40 wells were produced, and none was written in a technical or uniform style suitable for any useful interpretation from geologists and mining engineers.

In the early 20th century, the petroleum technical environment slowly acknowledged the need to solve of problems of increasing complexity associated with petroleum production by using professional engineers trained in petroleum technologies. In 1907, the Kern Oil and Trading Company of California hired geologists and mining engineering graduates from Stanford University to improve the production technology portfolio of the firm. The first academic coursework with a curriculum in Petroleum Engineering dates to 1912 at the University of Pittsburg, PA. The first degrees in this field were awarded in 1915-16, but the reception of this new original title, both among the students and industry, was somewhat lukewarm. Some students close to graduation in mechanical engineering were offered to switch their title to “petroleum” upon the study of the institutional coursework and many of them refused because of skepticism over such narrow, and still not well understood, field. Even the petroleum industry, although interested in this educational shift, showed some hesitation at the beginning.

The decisive push towards innovation of engineering methods in oilfield exploration and production came in 1910, when the United States Bureau of Mines (USBM)[5] was founded. The agency's mission was to study the country’s mineral resources and to propose programs for their better development and exploitation. In 1917, the Oil and Gas Division of USBM was formed - the same year the American Association of Petroleum Geologists (AAPG)[6] was also founded in Tulsa, Oklahoma. This office, together with its laboratories (the first one was established at Bartlesville, Oklahoma, in 1914), was the first to start systematic investigations to understand and adopt more efficient mechanisms and methodologies for petroleum production in the United States.

Right after World War I, when petroleum became also synonymous of politics, diplomacy, and international strategies, the American Petroleum Institute[7] was founded, which became a point of reference for technical standards and regulations in the international petroleum sector. The Petroleum Engineering, Development and Production Division of API was established in 1927. The role of the American Institute of Mining Engineers (AIME, founded in 1871) also proved fundamental for the development and the institutionalization of petroleum education and professional development. In 1913, AIME organized a Committee for oil and gas, headed by Lucas, for the purpose of promoting and disseminating knowledge in the field of petroleum engineering. In 1922, the Committee evolved into the permanent AIME Petroleum Division, then the AIME Petroleum Branch, and finally transformed in 1957 into the Society of Petroleum Engineers (SPE).

Petroleum engineers started to be employed in drilling and production operations since late 1910s; the trend eventually increased and became shortly a “common practice” in the 1920s. It was in that period that, chiefly in the United States, several oil companies focused their efforts on the need to rationalize exploration, drilling and production operations, and opted to invest human and financial capital into the creation of tailored study groups under the auspices of AIME, API, AAPG, and later also the American Chemical Society (AChS).

In Europe, petroleum engineering studies were not yet particularly developed. The American techniques soon became the standard references for the rest of the world. Some exceptions were the scientific and technical growth in Great Britain, with remarkable work run by the industry practitioners and academic scientists members of the Institution of Petroleum Technologists, and the USSR which capable of developing important advancements in petroleum enhanced recovery and turbo drilling (or, downhole drilling motors) technologies.

Carll, John. F. "Oil Well Records, Selected from the Collections of Mr. John. F. Carll, Assistant Geologist in Charge of the Geological Survey of the Oil District of Pennsylvania." Proceedings of the American Philosophical Society 16, no. 98 (1876): 346-80.

Fowler, H. C., and United States. Developments in the American Petroleum Industry, 1914-19: Exploration, Drilling, Production, and Transportation (a Review and Digest). U.S. Dept. of the Interior, Bureau of Mines, 1941.