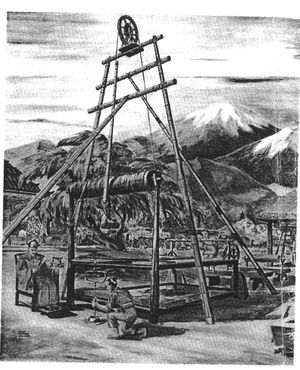 Chinese early mechanical drilling rig powered by hand labor: a worker spins the winch to provide the alternating force to beat the downhole 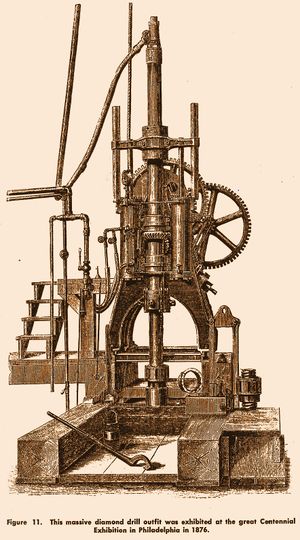 Drilling fluids are used principally in rotary drilling since the early 20th century, which is the practice of well drilling implemented by means of a rotating bit. In 347 BC, before well drilling began in the western world - both by mean of percussion or rotary system - the Chinese knew and used drilling fluids (mainly water) for two purposes: to soften rock formations and to removing the drilling cuttings. These wells had depths of up to some 790 feet and were drilled by bits attached to bamboo poles. Except for China, no wells were drilled through rocks using drilling fluids before the 19th century.

The early petroleum wells were chiefly dug manually - using shovels, pickaxes and buckets to recollect rocks and ground - and at relatively shallow depths (rarely the depths reached out beyond the threshold of 160-200 feet). Before 1845, it is not recorded any attempt to utilize drilling fluids in connection with drilling equipment to uncap petroleum, water and brine resources, except pouring water in the well after the drilling to soften certain clay formations and to aid in removing cuttings.

In 1845, the French engineer Pierre-Pascal Fauvelle (1797-1867) drilled successfully a water well in Perpignan, France, depth 718ft by using for 54 days a water-flushed set of tools, and this is credited as to have been the first likely predecessor (a hydraulic drill, patented in 1845 in France, and in 1846 in Spain) of all our modern rigs as far as the utilization of drilling fluids is concerned. In 1833, Fauvelle matured first the idea while was observing a well being bored by the percussion method of the time; the tool struck water, which spouted with great force up around the drill, and Fauvelle noticed the gusher of water bringing cuttings to the surface. He designed a set of tools, possibly aided by some designs developed by the British Robert Bear who patented a similar system but never put it into practice. His equipment consisted of a hollow boring rod, formed of wrought iron tubes screwed end to end; the lower end of the hollow rod is armed with a perforating tool; the diameter of the tool is larger than the diameter of the tubular rod, in order to form around it an annular space through which the water and excavated material may rise up. The upper end of the hollow rod is connected with a force-pump by jointed or flexible tubes. This boring tube may be either worked by a rotary movement with a turning handle or by percussion with a jumper. Fauvelle used his equipment to drill water wells, and it was not until many years later that it was used to drill oil wells. The only fluid used was plain water, no one thought at the time of mixing clay or other substances with the water to make a muddy fluid; but, undoubtedly, Fauvelle proofed and popularized the basic principles for the development of the drilling fluid technology. After him, drilling fluids were used around 1850 in the percussion drilling technique in order to suspend the cuttings.

In the United States, in 1857 a patent was issued to an inventor named Bowles for a drilling system which employed reverse or jetty circulation. This method employed a hollow drill stem, but instead of pumping the water down the inside of the hollow stem and allowing it to return to the surface outside the stem, the principle was reversed: the water was pumped down the borehole and came back up through the hollow stem. After Bowles, the reverse circulation drilling[1] became object of numerous research development studies.

Afterwards, almost nothing was done in the petroleum drilling concerning fluid applied to boreholes. On the other hand, the concept was applied success in the mining industry - from which came many of the petroleum industry best professionals. For example, the diamond drill system developed by Rodolphe Leschot, French engineer, in 1863 was receiving increased attention during the 1870's. According to the patent (July 14, 1863 US Patent 38235), his device included a small water pump to remove the rock cuttings and dust, as well as to cool the core barrel. The fluid used was water. This machine used a tubular boring rod with a water-swivel attachment at its upper end and a diamond studded bit on the lower end; a constant stream of water was forced down the boring rod and came up outside the rod to the surface.

Meanwhile, Fauvelle's early success had remained almost forgotten in the literature of engineering by petroleum drillers. Development of these devices continued throughout the late 1800s that were capable of drilling to around 6000 feet. However, most of this mud assisted drilling was used in mining operations, not for petroleum. In the 1870s-1880s few European drillers were experimenting improved versions of the Fauvelle technique in the petroleum fields. The first known successful use of the water-flush system in drilling for oil was that of a well drilled in Pechelbronn, Alsace, in 1881. About this same time, the Nobel brothers used the Fauvelle method while drilling in the Russian petroleum fields at Baku, Absheron Peninsula (modern-day Azerbaijan). Prior to 1876, when steel drill-stem pipe was introduced, drillers had difficulties with their drill-stem bursting under the continued pressure required to inject the waters. The pumps supplying water did not operate continuously, and it was necessary to stop the drilling every two feet of depth and started the pumps to let the circulating water wash away the cuttings.

It was during the 1880s that well drillers apparently first became aware of the value of mud as a drilling fluid. One of the first records is the 1887-1890 work developed and eventually patented by M. T. Chapman who mentioned the use of a "stream of water and a quantity of plastic material, whereby the core formed in the casing will be washed out and an impervious wall be formed along the outside." This concept represents the beginning of the modern science of drilling mud engineering. Fauvelle and the diamond drill system concerned the use of water to flush cuttings to the surface. Chapman also discussed use of several additives to sustain the building of a lining for the walls of the hole like clay, bran, grain, and cement.

In 1889, the Austrian-born engineer Albert Fauck (his name is known in the U.S. drilling sector with numerous inventions since the 1870s) was introducing his improved type of percussion drill which use used a master flush method. The bit was built in two sections, on a telescoping principle: water was pumped down the hollow drill-stem and returned bearing the cuttings to the surface. Its principal advantage was its speed of action since it could operate at the speed of 250 stokes per minute - it was called the Fauck Express.

In the 1890s the ground was ready to bring the fluid-flushed rotary drilling system to its climax. In June, 1899, Anthony Francis Lucas (1855-1921), a mechanical engineer born Antun Lučić in Split, Austria-Hungary (modern-day Croatia), arrived in Beaumont, TX and leased land on which he proposed to drill for oil. His crew, composed by veteran drillers experts, a rotary system and was already acquainted with the utilization of drilling fluids to bore for water. On October 1900, they started drilling and soon hit quicksand, and thickened the fluid with clay (high ground plasticity Pretty difficult the stabilization of the borehole). The site produced muddy fluid which promptly lined the hole, sealed off the quicksand, and solved the problem. At the start of drilling, the circulating fluid was used intermittently: the crew stopped the rotary drill at regular intervals to allow the pumps to send down fluid to bring up the cuttings. As they went deeper and struck gas pressures, they put the pumps on continuous service. On January 10, 1901, with the drill down 1,040ft (317m), oil was found. This is acknowledged to be the first massive oil discovery (pivotal for the beginning of the modern petroleum industry of Texas) achieved applying mud fluids to rotary drilling – the system than along the 20 years to come would have made the about 80% of the petroleum drilling in the world.

Rotary applications soon confirmed that drilling mud density improved the borehole stability and was fundamental for the hydraulic control of the well. In the 1920s the use of regulating mud density by barite became standard, and in the 1930s bentonite was identified as the most convenient viscosizing material. The first additives to control viscosity (phosphates, tannin, etc.) came into use in the same years, together with the standardization of both field and laboratory rheological measurement. Oil-based mud was also developed, and in 1938 a well was drilled by means of air as drilling fluid; however, this technology did not come into regular use until the 1950s, together with foam or aerated mud applications. In rotary drilling - a nearly continuous process - cuttings are removed as drilling fluids circulate through the bit and up the wellbore to the surface. Along the years, the expression drilling fluid was assimilated in the one drilling muds, since the fluids utilized were increasingly - then, totally - semiliquid-plastic compound of water mixed with sands, clays, cements, and/or several other substances. Today, muds[2] are and indispensable product in the petroleum drilling and used in several forms and staged of the making of the borehole.

Daumas, Maurice. A history of technology & invention: progress through the ages Vol. 3: The expansion of mechanization 1725-1860. New York: Crown Publishers, 1979.

Giddens, Paul H. Early Days of Oil. A pictorial history of the beginning of the industry in Pennsylvania. Princeton: Princeton University Press, 1948.