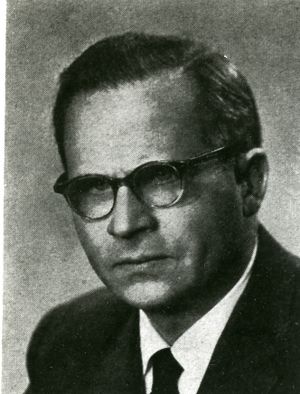 Peter C. Goldmark (IRE Associate, 1936; Member, 1938; and Fellow, 1942) ranks among the most important inventors of sound recording and television technology history. Born in Budapest, Hungary, on 2 December 1906, Goldmark studied at the Universities of Berlin, Germany, and Vienna, Austria, receiving the Ph.D. in physics from the latter in 1931. Then he worked for a British radio company. After two years in England, he emigrated to the United States, and in 1936, he joined joined the Columbia Broadcasting System, Inc. (CBS) as Chief Television Engineer, later becoming Director of the Research and Development Division. He developed his most famous inventions at CBS.

Television in the 1930s was a new and experimental medium, with limited channels, black and white images, and very few shows. It was the radio that entertained Americans with sitcoms, news, and commentary. Goldmark was one the strongest voices arguing that television had great potential to become important and that shows could be transmitted in rich and engaging color.

In 1940, inspired by the lush color of the motion picture "Gone with the Wind," Goldmark decided that it was possible for television to deliver color images. He set out to create what has become known as the field-sequential system, a method of sending a series of primary colors to the eye. The first practical color television system was developed under his direction in the CBS Laboratories, and on 27 August 1940, the first color broadcast in history was made from the CBS television transmitter in New York. In 1945, he was awarded the Television Broadcasters Association Medal for his pioneering color television work. The Goldmark system, sponsored by CBS, briefly became the standard in the United States in 1950, but was abandoned several years later in favor of a competing system developed by the Radio Corporation of America (RCA).

During World War II, CBS Laboratories were responsible for many military developments in the field of electronic counter-measures and reconnaissance, under his supervision. After World War II, Goldmark changed his focus to sound recording and began developing a new sound technology, the long-playing record (LP). Goldmark and his associates at CBS Laboratories developed the long-playing record (LP). He was frustrated with the poor sound quality of 10-inch, 78-rpm discs and annoyed by the frequent need to flip sides. Despite limited knowledge of the sound recording process, in 1945 he and a team of engineers began developing a better record. The team adopted the vinyl material and the 33 1/3-rpm speed that had been used for v-disc records during the war. They enlarged the diameter to 12 inches and experimented with recording techniques to capture sound better. By 1948, the LP was ready to be introduced to the public. They could hold much more music—an entire symphony—and produce better sound then a 78.

In the 1950s, Goldmark and his CBS colleagues began developing a record player for the car. To be viable, the car record player had to be small enough to fit in the glove compartment. Goldmark, who had spent the 1940s making records bigger, now turned his attention to making them smaller. The end result was a seven-inch record. In addition to shrinking the record, the rotating speed was reduced by half and the number of grooves per inch tripled. Goldmark’s team struggled to eliminate the effects of road vibration, which caused the record to skip, but were never completely successful. The car record player debuted in Chrysler luxury autos in the late 1950s, but was never good enough to gain wide acceptance.

In 1954, Goldmark became President of CBS Laboratories and Vice President of CBS, In 1962, he worked at CBS and served as a Visiting Professor for Medical Electronics, University of Pennsylvania Medical School in Philadelphia. At that time, Goldmark was a Fellow of the IRE, the AIEE, the SMPTE, the Audio Engineering Society, and the British Television Society. He received the Morris Liebman Memorial Prize (1946). the Vladimir K. Zworykin Television Prize (1961), and the Achievement Award from the IRE Professional Group on Audio (1960).

By the late 1960s, Goldmark was one of the most famous engineers in the United States. He was frequently quoted in newspapers and magazines on issues related to the entertainment industry. He completed an autobiography in 1973, and died in Westchester, New York in 1977.

Retrieved from "https://ethw.org/w/index.php?title=Peter_Goldmark&oldid=173732"
Categories:
This page was last edited on 15 February 2019, at 15:13.
About ETHW
Policies and disclaimers