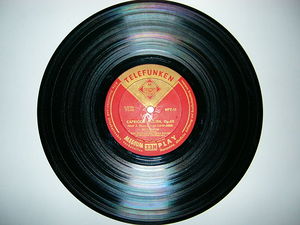 The long playing (LP) record and the 45-rpm disc were two different approaches to high fidelity music, introduced by two different companies in the late 1940s. Since the beginning of the phonograph, most records had played for about two or three minutes. Sometimes record companies issued longer recordings on large, 12-inch discs. But when the RCA Company began work on an improved disc in the mid-1940s, they stuck to the idea that a record should not have to hold more than one song. In order to make the disc smaller than the 10-inch, 78-rpm discs used since the 1890s, they reduced the speed to 45-rpm and used a much finer groove. This meant that they could pack in more grooves in a smaller space. They used a new plastic material, called vinylite, which resulted in the playing stylus picking up less noise and hiss. World War II interrupted this work, but the new 45-rpm disc and its player were introduced with great fanfare in late 1947.

At about the same time, CBS Record Company (the successor to Columbia Phonograph Company established in the early days of the phonograph) introduced its 12-inch, 33 1/3-rpm, long playing record. The development of the LP dates back to 1945, and was the work of CBS research director Peter Goldmark and other engineers at CBS. It was also made of vinyl plastic, and had very fine grooves, but it was a different size and speed than the 45-rpm and could not be played on the same phonograph without modifications. The LP was not intended to hold short songs like the 45-rpm, but was for classical music, which often ran for 20 minutes or more without a break. 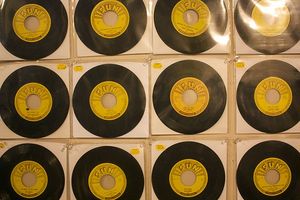 Within a few years, however, most record companies had adopted both the LP and the 45-rpm formats, using the 45-rpm for singles and the LP for classical albums. Engineers easily adapted record players to accommodate both types of discs as well as the older 78-rpm singles. Soon, record companies discovered that the growing popularity of Broadway show tunes and movie soundtracks helped LP sales, because these types of recordings were usually released as sets of discs called albums. These albums (now just a single disc) were so profitable for the record companies that they began releasing more and more popular music on LP rather than as singles. After phasing out the 10-inch, 78-rpm disc around 1958, record companies heavily promoted both the LP and the 45-rpm disc. Sometimes, when songs made famous on the radio were available only on an LP and not a 45-rpm disc, sales of the more expensive LPs could be quite high. The growth of LP sales in the 1960s and 1970s transformed the record business, generating large profits and restoring the industry to the place it had held in the early 1920s before radio was introduced.

The arrival of the compact disc in the 1980s severely curbed production of LP and 45 discs. Sales of both dropped quickly and most major label record companies stopped releasing them in large amounts by the early 1990s. However, both are still being produced to this day. Vinyl thrives in underground music scenes and niche collector markets, and is still commonly used by DJs for mixing in a live setting. Within the last ten years, vinyl has experienced a minor resurgence in the mainstream, with many of today's top 40 artists issuing their records on vinyl formats with a limited pressing run.