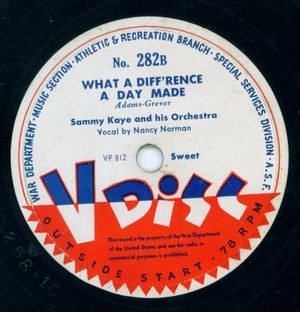 V-disc was the name given to special phonograph records distributed during and after World War II to entertain soldiers in their camps around the globe. World War II was the first major war fought after the development of broadcasting, and by that time everyone had come to love radio entertainment. When more and more soldiers began to take stations in Europe, the Pacific theater, and Africa in 1940 before the war began, the American military began to think about ways to bring them news and entertainment from home. Regular radio (which was all AM at the time) only had a small reception area, and international broadcasting by shortwave was unreliable because it could be disrupted by bad weather. It was decided to “can” entertainment and send it overseas on discs, where it could be broadcast locally.

The idea came from people like Robert Vincent, a sound engineer with the United States Army Special Services Division, who suggested the use of records to the United States War Department. He got permission to set up a new program in July 1943, and the first V-Discs were shipped 1 October 1943, from the RCA Victor pressing plant in Camden, New Jersey.

Most V-Discs were a little bigger than regular 78 rpm records—12 inches instead of 10 inches—and played up to six minutes per side rather than four. Permanent camps set up overseas often had small radio stations that could be picked up for miles around, and each camp was sent a “buddy kit” consisting of a phonograph, microphone, public-address amplifier, and records that could be played over the air.

The War Department produced some original shows, like the famous “Command Performance,” which featured the top stars of the day, such as Bing Crosby, Dinah Shore, and Bob Hope. Other shows were recorded off-the-air in the United States and duplicated on V-discs. When the war ended, many overseas army camps remained, so V-disc production continued. It lasted until 1949, when disc distribution was replaced by broadcasts from the Voice of America stations around the world and by programs distributed on the new technology of magnetic tape. During the six years that V-discs were in production, over 8 million records were shipped overseas.

Retrieved from "https://ethw.org/w/index.php?title=V-discs&oldid=120370"
Categories:
This page was last edited on 28 September 2015, at 19:54.
About ETHW
Policies and disclaimers