Doctors have used x-rays to see inside the body for more than a hundred years. But this technique has many limitations. X-rays can't show features of soft tissues, which make up most of the body. In the 1960s and 1970s it was still very common for doctors to perform so-called exploratory surgery in order to investigate parts of the body for disease or injury. Today, however, new techniques of imaging can usually take the place of exploratory surgery. Three extremely important techniques of looking inside the body are computer assisted tomography (CAT), magnetic resonance imaging (MRI), and ultrasound imaging. 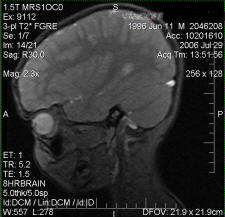 A CAT (computer assisted tomography) scan is a cross-sectional image created by taking traditional x-ray images from many different directions and then using a computer to calculate the shapes and positions of objects blocking the x-rays. CAT scans were impossible before the availability of the modern computer. David Kuhl and Roy Edwards built a transmission CT scanner. Their CT scan of a patient on 14 May 1965 was possibly the first ever made.  In the 1960s Allan Cormack in the United States did important work on a scanning method that projected gamma rays (which is electromagnetic radiation of shorter wavelength than x-rays) through an object on a rotating platform. In the early 1970s Godfrey Hounsfield in England developed a CT scanner and produced medical images. Within a few years there were hundreds of CAT scanners throughout the world, and in 1979 Cormack and Hounsfield shared the Nobel Prize in Medicine for their work in developing computer assisted tomography. 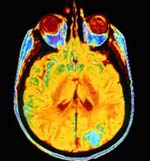 An MRI of the human head. The different colors indicate regions of the brain that are physiologically active.

MRI, or Magnetic Resonance Imaging, takes advantage of the fact that different chemical elements respond differently in rapidly changing magnetic fields. Since different chemical elements are associated with different tissues in the body, it is possible to form medical images. Because this technique requires high-intensity magnetic fields, the equipment is large and expensive. The basic idea was first demonstrated in the 1940s by Felix Bloch at Stanford and, independently, by Edward Purcell at Harvard. It was not until the 1970s, however, that the technique became practical for human use. One of the leading developers, Raymond Damadian, formed a company to produce MRI machines, and they began taking orders in 1980. By the end of the decade thousands of MRI machines were in use in hospitals worldwide. 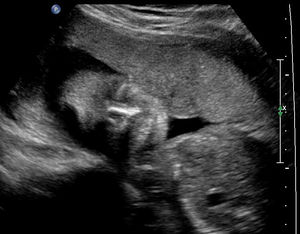 Ultrasound imaging grew out of submarine technology! The threat of submarines during World War I and World War II led to a great deal of research into what became known as sonar. Sonar works by sending out pulses of sound and detecting the echoes when the sound is reflected back by objects. Bats use sonar to locate insects in the dark. In the 1940s and 1950s a number of engineers worked to adapt sonar to medical use; among the most influential were George Ludwig at MIT, John Julian Wild and John M. Reid in Minnesota, and Douglass Howry at the University of Colorado. In the early 1960s a number of products reached the commercial market, and doctors soon found many uses for ultrasound imaging, including gathering images during a pregnancy.

Retrieved from "https://ethw.org/w/index.php?title=CAT,_MRI,_and_Ultrasound&oldid=196014"
Categories:
This page was last edited on 27 October 2022, at 12:34.
About ETHW
Policies and disclaimers