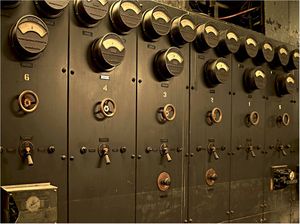 The New York Hotel DC Board 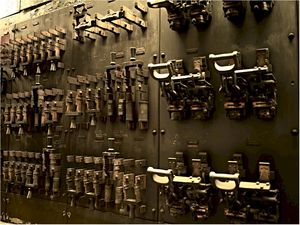 The New York Hotel DC Board

With the opening of the Pearl Street station in New York in September 1882, Thomas Edison ushered in the electric age. Though arc light systems abounded, they were not practical for indoor spaces. Pearl Street also introduced the concept of power sold as a metered commodity. Ironically, the success of Edison’s original lighting system in some ways proved its undoing—or rather, its forced modification. Though Edison himself emphasized scale and distribution in his system, the demand for electricity soon led to the desire to build ever-larger power plants and transmit that power over greater distances. Additionally, with the rapid distribution of industrial electric motors came a strong demand for voltages other than the 110 volts used for lighting. The Edison system, which used direct current (DC), was ill-suited to meet these new demands. The highest voltage available from Edison was 220 volts, based on an innovation developed by future electric railway pioneer Frank J. Sprague. Sprague refined an English concept which placed two generators in series to double the transmission voltage and hence the range of distribution from one square mile to three square miles. A "neutral" wire connected between the two machines supplied a 110 volt lighting current.

Though devised to increase distribution range and concurrently reduce copper requirements by 62% it proved ideal for the larger electric motors that were developed by Sprague. The success of the motors and consequent load on the system exacerbated the need for generation, which was not efficient at 110 volts. Sprague developed 400 volt motors for industry and 550 volt motors for street railways, but those required separate generation and transmission systems.

The problem of transmission was even more difficult, since the long distance transmission of bulk quantities of DC at 110, 220 or even 400-550 volts was very expensive owing to the high current involved and the consequent resistance losses in the cables.. Others had developed power systems to supply motors, primarily Leo Daft, who, with the system of the Excelsior Power Company, constructed a substantial system that supplied electric motors in the industries of lower Manhattan but those also used voltages in the 110-220 range.

The importance of motor loads was obvious as Edison's system did not show a profit until the electric motors developed by Frank Sprague were on the system to constitute a "daytime" load when lights were not used.

In 1886, George Westinghouse, a wealthy and respected inventor, but a newcomer in the electric power industry, founded Westinghouse Electric in order to compete with Edison. Westinghouse’s system relied on the discoveries and patents of Nikola Tesla, a Serbian (born in modern-day Croatia) immigrant who passionately believed in the superiority of alternating current (AC) power. Power loss in transmission depends on voltage—the higher the voltage, the smaller the loss for a given amount of power. Unlike DC, the voltage of AC can be increased (stepped up) with a transformer at the generating station, and then it can be transmitted over long distances. Then, before it is delivered to customers, the voltage can be reduced (stepped down) to safe, usable levels again.

Edison’s Pearl Street station was enormous for 1882, but lit only one square mile of New York City. Lighting New York would have taken 36 stations in Edison's estimate just to cover Manhattan below Central Park, to say nothing of additional power for motors, as Edison had stated his primary interest was in lighting.

Westinghouse’s AC system, on the other hand, made it possible to put large generating stations outside of cities and provide power to more customers.

Edison was less than thrilled with the emergence of Westinghouse’s technology, which threatened his own dominance in a field he felt he had virtually created. He also had genuine concerns about the safety of AC. The two men engaged in a public relations battle to determine which system would become the dominant technology. In an attempt to discredit AC power Edison stooped to some low tricks. He paid schoolboys a quarter for each dog or cat they delivered to him and then he electrocuted the animals in deliberately gruesome public experiments. In another desperate attempt to sway public opinion against AC, Edison recommended that the state of New York use electrocution by means of AC power as its method of capital punishment. He even suggested calling the electric chair the “Westinghouse Chair” and recommended that the verb “Westinghoused” be used to describe electrocution.

Edison’s theatrics notwithstanding, the superiority of AC became increasingly apparent to the public. And although Edison stubbornly defended DC, the use of AC equipment at the huge new Niagara Falls power facility in 1895 marked the rise of AC current.

AC was not without problems of its own, however. AC power flow is subject to magnetic (inductive) effects and also electrostatic ( capacitiative) effects which cause power loss. In the first instance, the magnetizing current consumed by motors and transformers causes power loss, in the second, the capacitaive effects of long power cable runs creates losses. While both can be compensated, the techniques were not well developed even at the time of the Niagara Falls installation. Therefore, most power was converted in "substations" to supply DC to customers.

The available DC motors were generally more efficient, and the use of DC enabled the use of batteries in substations to protect against failures and to assist with peak loads. The substation concept had been proposed by Sprague to the Edison Company in an 1886 report to reduce the cost of multiple DC power stations at a time when there were no reliable AC motors.

Charles Steinmetz, the legendary mathematician whose theorems dominated AC development, recommended in 1896 that DC distribution be used so long as there were sufficient customers to support the expense of the substation. Only in areas were customer load was light should AC be installed. Thus the primary source of customer power in cities was DC, for the next three decades.

As AC transmission and distribution techniques improved, and a variety of types and sizes of AC motors became available, a gradual swing toward AC began around 1900. By 1920 most utiltity companies were finding the cost of substations excessive and a conversion of systems (called "changeover") was underway. The last holdout, the NY Edison Company, initiated the change in 1928, using the techniques developed by its AC competition, the United Electric Light & Power Company, a former Westinghouse holding.

Even with this transition, it took many years for the hundreds of millions of dollars of investment in DC systems to be retired. Smaller cities with smaller DC zones changed rapidly, but large systems remained in place for decades. The last DC customer in Manhattan was not disconnected until 2007, and some customers in San Francisco still used DC as late as the decade of the 2010s.

The simplicity of DC transmission has made it standard in street railway and transit systems. Some long-range transmission systems use DC in the line between converter stations to eliminate capacitance losses on long lines especially those with long underwater cables. Moreover, the use of DC for renewable systems and power storage with batteries is on the rise, as are localized DC netwroks in computer server "farms."

Thus a century and a quarter later, Edison's attacks on AC have proven not only pointless, but also short-sighted as AC didn't then, and never would, dominate completely the electric distribution business.