Since 1947 when Pakistan was created, with two wings, East & West Pakistan, there were a couple of members of IEEE located in this area.

Upto 1968 there were more than one hundred members residing in both East & West Pakistan. More in West Pakistan especially in the town of Lahore, the capital of West Pakistan, a centYaJ place of Electrical activities. Lahore is also the Head Office of Water and Power Development Authority, the biggest utility company of the country. The IEEE members residing in Lahore felt the need of having a cornmon forum for arranging technical meetings and seminars to increase their technical knowledge. 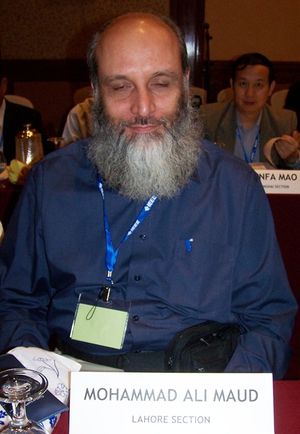 In accordance with IEEE by-laws collection of petitions for establishing a Pakistan Section was taken in hand. Since members of IEEE were scattered allover the country it took quite some time to collect the requlsite member of petitions from IEEE members. The entire process of collecting of petitions and submitting them to Head Office was carried out for a couple of months by WAPDA's Director Mr. 1.0. Arshad and an American expatriate engineer Mr. Larner, who later on became Fellow of the IEEE. Therefore a special resolution was approved for the establishment of Pakistan Section in 1968. Then Mr. I.D. Arshad was appointed as Chairman of the Section on adhoc basis to conduct elections for the officers of the Section. As a result of elections Mr. S.M. Akbari became the first Chairman of the Section for the year 1969.

Framing of the constitution of Pakistan Section was then taken up which was approved by the Regional Director and IEEE Executive Committee in 1970. With the establishment of the Section in this country many benefits started accruing to the members living in this area. Technical meetings were regularly held almost every month at which papers were contributed by prominent engineering and IEEE members. To encourage the enrolement of new members it was resolved by the Pakistan Section for allowing them the facility of payment of a part of their dues in rupees - IEEE Headquarters agreed to accept but 10% of the annual dues in local currency. This amount was used in turn by the local section to meet with the expenses of arranging technical meetings, seminars and for conducting membership publicity campaign.

Incidently Pakistan Section became one of the pioneer Section in Region-10. Mr. S.M. Akbari remained Chairman of the Section upto 1972. In 1973, Mr. S.M. Vehra was elected Chairman to succeed Mr. Akbari who remained in this position for about six years after repeated elections. The Region-10 Committee proposed an amendment to the PAKISTAN Section Constitution restricting the tenure of office of the Section to a maximum of three years which amendment was accepted by Pakistan Section and provided as such in the Constitution.

Emergence of other Sections[edit | edit source]

During this period members residing in Karachi, a big port city of Pakistan petitioned to form a sub-section which was accepted. In 1978, Mr. I. D. Arshad was elected Chairman of the Section when the total membership of the Section was increased to 135. This number had gone much below 100th mark after the separation of East Pakistan in early seventies when Bangla-desh was created. Due to extra efforts put in by the officers of the Section and active support given by Director Region-10 the membership compaign was further speeded up. It was in late seventies that Karachi became a fulfledged section. Karachi as aforesaid is the biggest port town of Pakistan, situated some 1000 km from Lahore.

Due to untiring efforts and dedication of Mian S. Hasan, previous Vice-Chairman, Secretary and Treasurer of Pakistan Section, Karachi sub-section was raised to Section level in 1982 when Dr. R.E. Larson the President of IEEE formally inaugurated. The Federal Capital of Pakistan - Islamabad also emerged on the map of IEEE as one of the Section. Now Pakistan has three sections one in Lahore, one in Karachi and one in Islamabad. A sub-section was created in Peshawar which will soon be upgraded to become a Section (reported in 2010).

A student branch at the University of Engineering and Technolog Lahore was also inaugurated by him in 1982. In Dr. Larson's remarks, he rightly mentioned Mr. Hasan as godfather of Karachi and Lahore Sections. Mian Saleem Hasan the present Section Chairman was elected to this post in 1982 and was re-elected in 1983. Due to his efforts and his colleagues working in the section Executive Committee a chapter of IEEE has been set up in the local University of Engineering. More than sixty students member have been enrolled and the overall membership of IEEE in the country has crossed the 200 mark. All Sections are actively engaged in the engineering profession and are collaborating with other national professional institutions in arranging symposium, technical lectures and seminars of national importance.

Pakistan consists of four provinces namely Punjab, Sind, North West Frontier and Baluchistan and has an area of 310,403 square miles which is surrounded in the north by the Himalayan Range and a narrow area of Afghanistan separates Pakistan from Russia.The southern territory of Sinkiang and Tibet border Kashmir in the north and east. On the west, low dry hills separate Pakistan from Afghanistan and to the south in Baluchistan it has a long common frontier with Iran. On the east are the Indian states of Punjab and Rajasthan and the Arabian Sea Lies in the south of the country. Basically Pakistan is an agricultural country and possesses one of the most developed irrigation systems in the world.

At the time of independence in 1947 there was little activity in the field of engineering industry in Pakistan. In the field of power, important towns were fed with local DC diesel generators. The first hydroelectric power station of 20 MW capacity was commissioned in 1948 at Malakand-Dargai in the north West Frontier. The first 132 KV transmission line was commissioned in 1952. In order to meet the magnitude of work required for the development of country's water and power resources on a mUltipurpose basis, an organisation called the Water and Power Development authority (WAPDA) was set up in 1958. The Charter of Duties of WAPDA included the generation, transmission and distribution of power, irrigation and reclamation of water logged and saline lands and flood control and inland navigation.

One of the largest rock fill dams in the world i.e., Mangla Dam, was built in 1967 having a live storage capacity of 5.34 MAF. Built across the mighty river Indus, Tarbela Dam world's largest earth fill dam was built in 1975 having a gross storage capacity of 11.3 MAF. Pakistan now has an installed capacity of more than 4000 MW. being managed by WAPDA and Karachi Electric Supply Company. Pakistan today is the only country in Asia outside Japan to have a 500 KV extra high voltage transmission line in use to transfer cheap hydel generated in the north to make consumption centres in the south. first link was commissioned in 1976.

In the Telecommunications sector, Telephone Industry of Pakistan and Carrier Telephone Industry was established in 1954 and in 1970 for the manufacture of telephone equipment and carrier equipment respectively. The first microwave link between Karachi and Islamabad was commissioned in early sometimes. The present capacity of 200,000 telephone lines is being extended in the Sixth Five Year Plan when many electronic exchanges will be introduced in the country. The Government of Pakistan has established National Radio and Telecommunication Corporation as well as National Institute of Electronics responsible for R&D research. In the private sector some firms have established to produce electronic components for radio and allied industries in Pakistan.

Pakistan made her debut in the world of nuclear power generation by commissioning 137 MW Karachi nuclear power station in 1972. The second nuclear power station of 600 MV capacity is proposed to be installed by 1968. Because of present poor domestic oil production and very large import bill for fuel it is essential to use nuclear energy technology for the overall development of Pakistan. The Government of Pakistan has made up a colossal plan to electrify rural areas and villages during Sixth Five Year Plan. More than 22 thousand villages have been planned to provide electricity in the Plan

In the field of manufacture of electrical equipment, the Pakistani industry is confined to the manufacture of conductors, transformers, switchgears and control gears, electricity meters,PVC cables, insulators, generators and electric motors and has achieved selfsufficiency in many branches.

In the field of fertilisers and cement industry there are more than 20 plants working allover Pakistan producing various types of fertilisers and cement. Five different organisations are manufacturing and assembling various type of tractors in Pakistan. In the field of transportation, cycles, motorcycles and small cars are being manufactured and assembled in Pakistan.

There are more than 17 radio stations working in Pakistan for which nearly 90% of the equipment has been manufactured in Pakistan. Colour television transmission is covering more than 90% area of Pakistan. The first television station was commissioned in 1963.

Pakistan is also manufacturing small ships upto capacity of 5000 tons at the Karachi Ship Yard. One of the largest Steel Mills in Asia has also been commissioned recently near Karachi with the assistance of Russian Goverment.

For the tourist attraction, a Karakoram High-Way has been constructed between the borders of China and Pakistan reaching the height of more than 14000 feet at many places, in the northern areas of Pakistan. This is considered to be one of the most important engineering feat of twentieth century.

Retrieved from "https://ethw.org/w/index.php?title=IEEE_Lahore_Section_History&oldid=186792"
Categories:
This page was last edited on 2 December 2021, at 19:46.
About ETHW
Policies and disclaimers