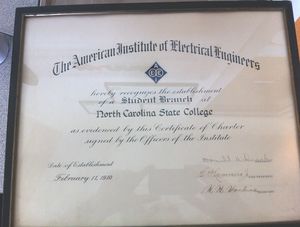 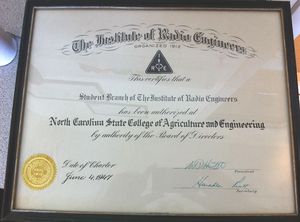 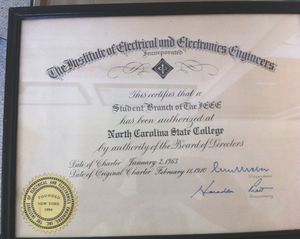 While the IEEE Eastern North Carolina Section has a history that dates back to its establishment in 1965, IEEE has an even deeper history in the eastern North Carolina area.  A student branch of the American Institute of Electrical Engineers was established at North Carolina State College (now North Carolina State University) in 1910.  A student chapter of the Institute of Radio Engineers was established at the same school in 1947.  When the AIEE and the IRE merged in 1963 to form the Institute of Electrical and Electronics Engineers, the two student chapters, which had been meeting jointly since at least 1955, also merged to form a student branch of the IEEE.  Today, the charters of all three organizations are proudly displayed in the IEEE Student Branch Office at NCSU.

Retrieved from "https://ethw.org/w/index.php?title=IEEE_Eastern_North_Carolina_Section_History&oldid=186684"
Categories:
This page was last edited on 12 November 2021, at 16:40.
About ETHW
Policies and disclaimers