The Institute of Radio Engineers (IRE) established its Canaveral Section in September, 1952. The American Institute of Electrical Engineers (AIEE) also existed in the local area, the Central Florida chapter having been formed in 1960. Several student members from each organization became leaders in the IEEE Canaveral Section later in their careers. 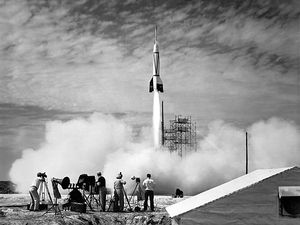 The Canaveral Section, originally formed during the merger of the Institute of Radio Engineers and the American Institute of Electrical Engineers in 1962 to form IEEE, has influenced and been influenced by the large number of electrical, electronics, and computer engineering efforts since the origin of the Space Coast. This influence was judged sufficient to be awarded an IEEE Electronic Technology in Space Rocket Launches, 1950-1969 Milestone, a worldwide historical designation. The dedication took place at the Kennedy Space Center Visitor's Complex Debus Center on May 25, 2001.

Canaveral's members have been known to be instrumental in the space program, as well as generating world-class research and development in areas such photovoltaic (solar) cells. Members have been intricately involved in international standards development and the invention of the Cochlear implant, in addition to day-to-day efforts in areas as diverse as power engineering, lightning protection, telemetry, and software development. Section influence has also extended to governmental contracting policy regarding the status and security of engineering professionals. IEEE Canaveral was a founding member organization of the Canaveral Council of Technical Societies (CCTS), which has also become an organization of influence.

Retrieved from "https://ethw.org/w/index.php?title=IEEE_Canaveral_Section_History&oldid=186463"
Categories:
This page was last edited on 2 November 2021, at 21:57.
About ETHW
Policies and disclaimers