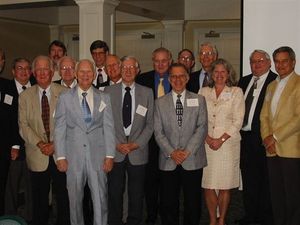 Past presidents of the Alabama section at the 75th anniversary celebration

In the Spring of 1929, a small group of engineers, mainly from Southern Bell Telephone and local power companies, petitioned for the formation of a local section of the American Institute of Electrical Engineers (AIEE). On May 22, 1929, the Board of Directors of the AIEE authorized the organization of a section to be known as the Birmingham Section of the American Institute of Electrical Engineers and to have as its territory 21 counties in north central Alabama. General W. E. Bare of the Southern Bell Telephone Co. called an organization meeting on June 21, 1929, and acted as temporary Chairman. Several leadership changes took place during the first year as a result of personnel transfers, and the Birmingham Section was suddenly confronted with the deadening effect of the Great Depression. During this time there was little interest and the section activities practically came to a halt. By September 1932 an effort was made to revive the Section and new officers were elected. In May of 1934 a petition was made to AIEE Headquarters to change the Section’s name to the Alabama Section and to increase its territory to include the entire state.

Reorganization at the Local and National Levels[edit | edit source]

Early in 1938 the Muscle Shoals Section was formed to include seven counties in northern Alabama, and several counties in Mississippi and Tennessee. Later that year the new section petitioned for and obtained the transfer of Madison and Marshall counties from the Alabama Section. In 1953 this organization apparently combined with the Huntsville Subsection of the East Tennessee Section of AIEE to form the North Alabama Section. About the same time the Huntsville Subsection of the Atlanta Section of the Institute of Radio Engineers (IRE) was elevated to Section status.

On January 1, 1963 the IRE and the AIEE merged to form the Institute of Electrical and Electronics Engineers (IEEE). The Alabama Section and other units of each of these two organizations then became units of IEEE.

In 2004, the section celebrated its 75th anniversary with a dinner and speech by W. Cleon Anderson.

In August 2013, the section established a Life Members Affinity group.

Partial List of Past Presidents of the IEEE Alabama Section:[edit | edit source]

In 1963, the AIEE merged with the Institute of Radio Engineers (IRE) to form the IEEE and changed the geographic name to the Alabama Section.

Retrieved from "https://ethw.org/w/index.php?title=IEEE_Alabama_Section_History&oldid=186414"
Categories:
This page was last edited on 2 November 2021, at 14:29.
About ETHW
Policies and disclaimers