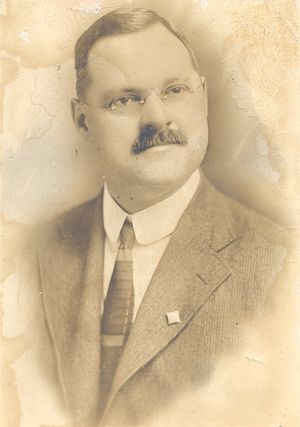 Greenleaf W. Pickard, IRE President, 1913, received a patent for a silicon crystal detector in 1906, and he founded the Wireless Specialty Apparatus Company in order to market his detectors.

Greenleaf W. Pickard was born on 14 February 1877 in Portland, ME. Pickard attended the Lawrence Scientific School at Harvard University and also took classes at the Massachusetts Institute of Technology. In 1899 he received a grant from the Smithsonian Institution to support his wireless research at the Blue Hill Observatory in Milton, MA. He joined the American Wireless Telegraph and Telephone Company in 1901 and installed wireless apparatus to report the Americas Cup yacht competition that year.

Pickard worked for the American Telephone and Telegraph Company from 1902 to 1906. During this period, he experimented with wireless telephony and also observed some of Reginald Fessenden's tests of a radio alternator. Pickard tested a large number of minerals in an effort to discover the most effective contact detector of radio waves. He found that a sample of fused silicon obtained from the Westinghouse Electric Company produced excellent results and he received a patent on a silicon crystal detector in 1906. Reportedly, he tested more than 30,000 combination's of materials for detectors.

In 1907, Pickard and two associates organized the Wireless Specialty Apparatus Company to market his patented detectors, one of which was called Perikon, an acronym for "perfect Pickard contact." Pickard was a member of both the Society of Wireless Telegraph Engineers and the Wireless Institute when they merged to form the IRE in 1912. He served as the second president of the IRE in 1913. During World War I, he investigated ways to mitigate static interference at a Navy radio installation at Otter Cliffs, ME. He published an IRE paper on the use of directional antennas to reduce static in October 1920. He speculated that much of the static was caused by solar phenomena.

In his October 1925 paper, Pickard reported that he had organized an "eclipse network," involving both commercial and experimental stations in an effort to measure the effects of the solar eclipse of January 24, 1925, on radio reception. Several stations had transmitted continuous wave signals at frequencies ranging from 57 kHz to 4 MHz. Observers including Alfred N. Goldsmith had made graphical recordings at various receiving sites. Pickard was awarded the IRE Medal of Honor in 1926 "For his contributions as to crystal detectors, coil antennas, wave propagation and atmospheric disturbances."

Pickard continued to investigate propagation of radio waves and served as a consultant to the Radio Corporation of America and other clients during the 1930s. He published an IRE paper in July 1931 on the effect of meteor showers on propagation. He also explored the effect of sunspots and atmospheric pressure and temperature on reception over a wide range of frequencies. He became a Fellow of the Radio Club of America and was awarded its Armstrong Medal in 1941. He died on 8 January 1956 at age 78, in Newton, MA.

Retrieved from "https://ethw.org/w/index.php?title=Greenleaf_W._Pickard&oldid=155922"
Categories:
This page was last edited on 9 August 2017, at 17:27.
About ETHW
Policies and disclaimers