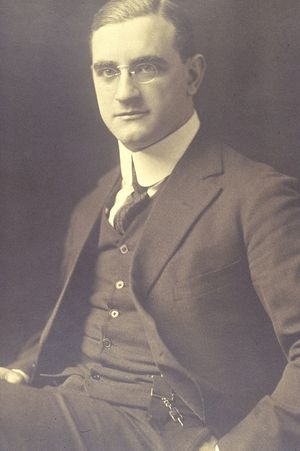 Alfred N. Goldsmith, IRE President, 1928, began working for RCA as the director of research, and later became vice president and general manager of the company.

Alfred Norton Goldsmith was born in New York City on 15 September 1888. He received his B.S. from the College of the City of New York (CCNY) in 1907, and began teaching there as an Instructor that same year. He continued working there while pursuing his Ph.D. at Columbia, where he studied under Michael Pupin, and received his degree in 1911. Although he left his active appointment at CCNY in 1919, he retained a lifetime Associate Professorship in Electrical Engineering at the College.

Goldsmith began consulting to government and industry while at CCNY, first with the U.S. Department of Justice as a radio expert and with the Atlantic Communication Co. as a radio engineer in 1914. From 1915 to 1917, he consulted for the General Electric Company, and in 1917, he became the Director of Research for the Marconi Wireless Telegraph Company of America.

In 1919, Marconi was acquired by the newly-founded RCA Corp., and Goldsmith was made director of research for RCA, directly responsible to David Sarnoff. At first he and his staff used the labs at CCNY for their research until RCA opened its first corporate labs[1] at Van Cortland Park. Beginning with his management and oversight, the RCA labs would become one of the most important corporate research laboratories in history. He rose through the company's ranks to the position of vice-president and general manager. In 1931, he left the company, opting then for independent consulting; however, he maintained an advisory relationship with RCA for life.

Goldsmith also made his mark contributing to and shaping the professional organizations of his field. Robert Marriott appointed him to a committee to pursue a merger of his Wireless Institute with the Society of Wireless Telegraph Engineers. Their efforts were central in the formation of the resulting Institute of Radio Engineers (IRE) in 1912.

Goldsmith became first Editor of the Proceedings of the IRE , and remained in that position for 42 years, elevating the journal to its leadership position. He was a sponsor and patron of the formation of the IRE Professional Group on Engineering Writing and Speech, the forerunner of IEEE’s PCS. He was honored as a Fellow of the IRE in 1915 and served as secretary in 1918, president in 1928 and on the board of directors for the entire 51 years of the IRE's independent existence. In addition to being awarded the IRE's Medal of Honor in 1941 "For his contributions to radio research, engineering, and commercial development, his leadership in standardization, and his unceasing devotion to the establishment and upbuilding of the Institute and its PROCEEDINGS", and the Founders Award in 1954. In 1963, the AIEE merged with the IRE to form the IEEE, wherein Goldsmith became Fellow, Director and Editor Emeritus. Goldsmith was the first recipient of the IEEE Haraden Pratt Award, established in 1972 to honor "outstanding service to the Institute." His bequest to IEEE led to the formation of the IEEE Foundation in 1974. The Foundation’s designation of planned giving, the Goldsmith League[2], still bears his name, as does the IEEE’s Alfred N. Goldsmith Award for Distinguished Contributions to Engineering Communication [3].

Other Interests and Achievements

Goldsmith's interests went beyond radio, however. He was a Fellow of the American Physical Society, the American Association for the Advancement of Science, the Acoustical Society of America, the Optical Society of America, and the International College of Surgeons. He served as President of the Society of Motion Picture and Television Engineers in 1932, and was a recipient of their Progress Medal Award. In 1966, he became Vice President (Electronics) of the Pan-American Medical Association. He was a Benjamin Franklin Fellow of the Royal Society of Arts (London). Other awards include the Modern Pioneer Award (1940) and the Townsend Harris Medal (1942).

Goldsmith authored a number of books, including technical texts, such as Radio Telephony (Wireless Press, 1918), and The Ultra-high-frequency Domain (Chicago: University of Chicago Press, 1936). He also authored less technical works including This Thing Called Broadcasting, co-authored with Austin C. Lescarboura, which considers the historical and cultural aspects of technology.

Goldsmith, Alfred N. and Autsitn Lescarbour.  This Thing Called Broadcasting: A Simple Tale of An Idea, An Experiment, A Mighty Industry, A Daily Habit, and A Basic Influence in Our Modern Civilization. (H. Holt and company, 1930)

Kilbon, Kenyon.  A Short History of the Origins and Growth of RCA Laboratories, Radio Corporation of America, 1919 to 1964. Revised Draft August 1964. Unpublished work.

Retrieved from "https://ethw.org/w/index.php?title=Alfred_N._Goldsmith&oldid=176716"
Categories:
This page was last edited on 4 September 2019, at 17:17.
About ETHW
Policies and disclaimers