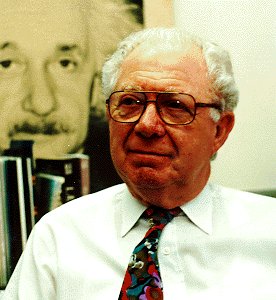 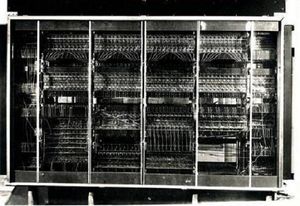 Central processing unit of the WEIZAC, Photo Courtesy of Weizmann Institue of Science

Prof. Gerald Estrin, a 1968 IEEE Life Fellow "For outstanding contributions to university research and education in computers, and to the design and construction of pioneering digital computers" was an early leader of computer design.  He is also a Guggenheim Fellow, and a member of the Board of Governors of the Weizmann Institute of Science, Israel.

He served as research engineer in the von Neumann group at IAS from 1950-1956, which led to an invitation from the Weizmann Institute of Science in Israel to direct the WEIZAC Project in 1954-1955. The first computer constructed outside western Europe and the United States, the WEIZAC computer is now an IEEE Milestone in Electrical Engineering and Computing. In the 1980s, the WEIZAC team was interviewed for the Computer Pioneers Project.

On returning to U.S. in 1956, Estrin helped found the computer science department at UCLA, where he helped pioneer the concept of reconfigurable computing. He also served as Chairperson of the UCLA Computer Science Department from 1979 to 1982 and from 1985 to 1988 before retiring in 1991. He was married to UCLA Computer Science Professor Thelma Estrin, and was the father of Deborah Estrin, also a UCLA Computer Science professor, as well as Margo Estrin and Judy Estrin. Professor Estrin died on 29 March 2012.

Retrieved from "https://ethw.org/w/index.php?title=Gerald_Estrin&oldid=159248"
Categories:
This page was last edited on 1 May 2018, at 15:50.
About ETHW
Policies and disclaimers