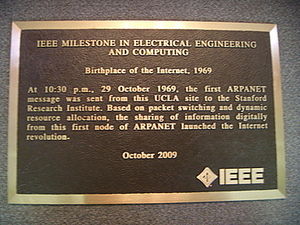 The IEEE Milestones program honors significant technical achievements in all areas associated with IEEE.  It is a program of the IEEE History Committee, administered through the IEEE History Center. Milestones recognize the technological innovation and excellence for the benefit of humanity found in unique products, services, seminal papers and patents. Milestones are proposed by any IEEE member, and are sponsored by an IEEE Organizational Unit (OU)—such as an IEEE section, society, chapter or student branch. After recommendation by the IEEE History Committee and approval by the IEEE Board of Directors, a bronze plaque commemorating the achievement is placed at an appropriate site with an accompanying dedication ceremony.

IEEE established the Milestones Program in 1983 in conjunction with the 1984 Centennial Celebration to recognize the achievements of the Century of Giants who formed the profession and technologies represented by IEEE.

Each milestone recognizes a significant technical achievement that occurred at least twenty-five years ago in an area of technology represented in IEEE and having at least regional impact. As of 2016, more than a hundred and sixty IEEE Milestones have been approved and dedicated around the world.

The IEEE History Committee also administers a special citation program to recognize events or institutions which – although not technical achievements as defined by the Milestone Program – have contributed to the profession. Examples might be: museums or archives with substantial holdings pertaining to the history of electrical engineering and computing, the holding of a seminal conference, or the formation of a technical society.

Is your organizational unit interested in sponsoring a Milestone proposal?[edit | edit source]

The History Committee is always open to Milestone proposals, and encourage IEEE organisational units to sponsor them. Please read the Proposing a Milestone page for guidelines and more detailed information. Also, please check the list of Milestones already in the proposal stage to make sure your intended milestone is not already in the process of being approved.

If you would like an example of a proposal to follow in preparing your own proposal, please click on the "All Milestone Proposals in process" link. It will show you the list of proposals which you can then click on to view the filled-out ones.

Retrieved from "https://ethw.org/w/index.php?title=Milestones:IEEE_Milestones_Program&oldid=154987"
Category:
This page was last edited on 24 April 2017, at 14:17.
About ETHW
Policies and disclaimers