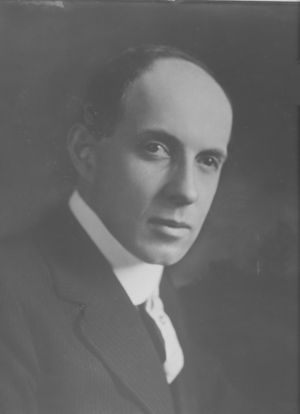 Frank B. Jewett, AIEE President, 1922 - 1923, worked as an engineer for AT&T, where his work demonstrated transatlantic radio telephony using a vacuum-tube transmitter.

Frank B. Jewett was born on 5 September 1879 in Pasadena, CA, and graduated from the Throop Institute of Technology (later known as the California Institute of Technology) in 1898. He did graduate work at the University of Chicago, IL, where he received the doctoral degree in physics in 1902. He then accepted a teaching position at the Massachusetts Institute of Technology, Cambridge, where he remained until 1904, when he joined the Mechanical Department of the American Telephone and Telegraph Company (AT&T) in Boston, MA. Initially, he assisted George A. Campbell in research related to telephonic transmission. He then succeeded Campbell as director of the transmission research group in 1906. In 1907, the Mechanical Department merged with the Engineering Department of Western Electric, located in New York City, as part of a corporate reorganization. Jewett moved to New York, where he became a research manager under J. J. Carty, the chief engineer of AT&T.

By 1912, AT&T was diversifying its research to include radio communication and electronic tubes. Jewett was among the AT&T engineers who witnessed a demonstration of the triode amplifier early in 1912, and he was instrumental in recruiting H. D. Arnold and others to develop the vacuum tube and its applications to telecommunications. Jewett led the engineering effort at AT&T that resulted in completion of the first transcontinental telephone line in time for the Panama-Pacific Exposition in San Francisco, CA, in 1915. That same year, AT&T engineers under Jewett demonstrated transatlantic radio telephony using a vacuum-tube transmitter. He was given a commission with the rank of major in the U.S. Army Signal Corps during World War I.

In October 1917, Jewett presented a paper on the subject of industrial research at an AIEE meeting in Philadelphia, PA. He stated that the war already was "exerting an enormous, stimulating influence on the extension of industrial research." He discussed some differences and some connections between the research done in an industrial environment and the "pure science" research at universities. He observed that contemporary industrial researchers had progressed beyond "the era of the cut and try method." Jewett argued that industrial and academic research laboratories were "very closely associated and must grow together and with the same relative vigor if the best interests of civilization are to be served." He cautioned, however, that schools should not "attempt to enter too largely into the realm of industrial research" or they would run the risk of creating "an atmosphere highly prejudicial to the broad training of men or to pure scientific research." Conversely, he noted that "the industrial research organization is not equipped to undertake the general work of the university either in the training of men or the conduction of pure research, nor can it afford to do so." He concluded that industrial research was "destined to grow enormously, provided an adequate supply of capable and highly trained investigators can be secured."

As part of an effort to make the industrial research environment more attractive to college-educated people he recruited, Jewett implemented a change in policy by encouraging his research staff to present and publish professional papers about their work. He assigned one individual to digest and report on the latest developments in science to the research engineers at Bell. As an example of the new policy, Jewett and a colleague, B. Gherardi, presented a joint paper on "telephone repeaters" at a joint meeting of the AIEE and the Institute of Radio Engineers in October 1919. In the paper, they reviewed the history of research and development on telephone amplifiers and asserted that "a complete solution of the problem was made possible only by the existence of a great unified engineering and research department, such as that maintained by the Bell System." They concluded that the successful application of the electron tube as a telephone repeater amounted to a "revolution in the entire scheme of telephone transmission."

The Bell Telephone Laboratories were established in 1925 with a staff of approximately 3600 and with Jewett as president, a position he held until 1940. His style of research management has been characterized by historian G. Wise as "endothermic," in contrast to the "exothermic" management style of W. R. Whitney of the General Electric Research Laboratory. The exothermic manager was "like a chemical reaction that gives off energy to its surroundings," whereas the endothermic research managers "could draw energy from their institutional surroundings." As an endothermic prototype, Jewett seemed more comfortable in the committee room, on the telephone, or behind the desk than on the lecture platform or roaming the halls of the laboratory.

Jewett was president of the AIEE from 1922 to 1923 and of the National Academy of Sciences from 1939 to 1947. He served on the National Defense Research Committee beginning in 1940 and conducted a survey of the capabilities of industrial research facilities throughout the country in preparation for the war effort. He also was chairman of the Board of Directors of Bell Laboratories from 1940 to 1944. In 1928 the AIEE awarded Jewett the Edison Medal "For his contributions to the art of electric communication." He died on 18 November 1949, in Summit, NJ, at age 70.

Retrieved from "https://ethw.org/w/index.php?title=Frank_B._Jewett&oldid=173640"
Categories:
This page was last edited on 14 February 2019, at 19:32.
About ETHW
Policies and disclaimers