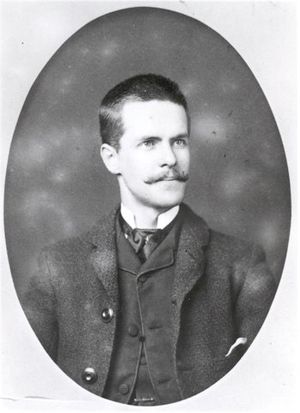 William Joseph Hammer, son of William Alexander and Martha A. (Beck) Hammer, was born in Cressona, Schuylkill County, Pa., February 26, 1858. He received his early education in the private and public schools of Newark, N. J., and in attendance upon lectures abroad.

In 1878 Mr. Hammer became an assistant of Edward Weston of Newark, N.J., at the works of the Weston Malleable Nickel Company. In December, 1879, he became an assistant to Thomas A. Edison at his laboratory at Menlo Park, N.J. He was engaged with Mr. Edison on his telephone work, electric-railway, and the general work going on at the laboratory, but the greater part of his time was devoted to work upon the incandescent electric lamp. In the fall of 1881, while electrician of the Edison lamp factory, he was sent to England by Mr. Edison as assistant to Mr. E. H. Johnson, and as chief engineer of the English Edison Company he installed in London the Holborn Viaduct central station of 3,000 light capacity. This was the first central station for incandescent electric lighting established in the world (started up Jan. 12, 1882). The New York Edison station started up later in the same year (Sept. 4, 1882). While in London in 1882, in association with Mr. Johnson, he also installed a large isolated plant, consisting of twelve Edison dynamos, at the Crystal Palace Electrical Exhibition, and arranged for the exhibition the entire Edison exhibit which had been shown at the Paris Electrical Exposition of 1881. Mr. Hammer designed and placed the first electric lamp sign ever made over the great organ in the concert hall at the Crystal Palace, and by means of a huge lever switch flashed the name "Edison." In 1883 he accepted the appointment of chief engineer of the German Edison Company, now known as the Allegemeine Elektricitaets Gesellshaft. He installed many plants throughout the German Empire, and assisted in the manufacture of the first Edison dynamos at Charlottenburg. While at Berlin in 1883, he invented and constructed the first motor driven flasher sign ever built (now in universal use), which spelled the name "Edison" letter by letter and simultaneously.

Mr. Hammer returned to America in the fall of 1884, when he took charge of Mr. Edison's personal interests and eight other Edison interests at the Franklin Institute Electrical Exhibition. Later he became confidential assistant to the president of the parent Edison company, and was an incorporator, trustee and the first secretary of the Sprague Electric Railway and Motor Company. Shortly thereafter he was appointed chief inspector of central stations of the parent Edison company, which post he held for two years, making electrical, mechanical and financial reports upon the stations throughout the United States. Later he was made general manager and chief engineer of the Boston Edison Company, and as a contractor installed its elaborate underground system of conductors. In 1887 he removed to New York to take up special expert work for the parent Edison company, and was sent to St. Augustine to take charge of the 8,000-light plant in the Ponce de Leon Hotel, the largest isolated plant in the world at that time, and with Mr. William Kennish erected at St. Augustine the first electric lighting plant ever operated by artesian well power driving the turbine and dynamo. In 1888 he was appointed consulting electrical engineer to the Cincinnati Centennial Exposition, and as a contractor designed and installed electrical effects as an attraction to the exposition, amounting to upwards of $60,000.

From Cincinnati Mr. Hammer went to France as the personal representative of Mr. Edison at the Paris Exposition of 1889, where he had forty-five assistants. During this exposition he accompanied Mr. and Mrs. Edison to the German Science Congress at Heidelberg. and at the close of the exposition he hired an enormous balloon, and accompanied by Drs. Rufus G. Wells and A. Lawrence Rotch of Blue Hill Observatory made a trip of over 100 miles, making meteorological, magnetic, electrical and other observations, and testing original methods of signaling from war balloons.

Since 1890 Mr. Hammer has been independently established in New York as a consulting engineer. He has had occasion to visit abroad frequently on behalf of his clients, and has been a delegate representing the United States and national engineering organizations at congresses and meetings. He was a member of the "Curie" Award Committee of the Franklin Institute, and represented the A.I.E.E. at the" Hall of Fame" ceremonies. He has devoted considerable time to the development of various patents which have been issued to him, and has lately devoted a great deal of attention to the study of selenium, and to radio-active, phosphorescent and fluorescent substances. He has compiled what was without doubt the most important bibliography on the subject of selenium, and was the possessor of a unique collection of autographed photographs of the leaders in the electrical industry; and his collection of incandescent lamps. which was truly a “History of an Art,” and upon which he has worked for thirty-two years, was without an equal anywhere in the world. For this collection of incandescent lamps, he was awarded the Elliott Cresson gold medal by the Franklin Institute. He was awarded the John Scott Legacy Medal and premium for his telephone relay and his long-distance sound experiments. He was awarded a silver medal at the Crystal Palace Electrical Exhibition of 1882, and a similar one at the exposition of 1892, and the Grand Prize and a special silver medal at the St. Louis Exposition of 1904. Mr. Hammer was a life member of the American Institute of Electrical Engineers, he has been vice- President of the American Institute, the New York Electrical Society and the Aeronautical Society, and was for ten years president of the National Conference on Standard Electrical Rules, which prepared and promulgated the National Electrical Code now in use throughout America. He was twice elected President of the Franklin Experimental Club. He was a Fellow of the A.A.A.S., and a member of the American Physical Society, Franklin Institute, Illuminating Engineering Society, and various other scientific and technical societies, and has taken a prominent part in the development of aeronautics in this country and abroad. He was one of the editors of the Aero Club's book “Navigating the Air,” and in collaboration with Mr. Hudson Maxim he compiled the “Chronology of Aviation” for the World's Almanac of 1911. At the James town Exposition International Aeronautical Congress of 1907 he was chairman of the general committee, and during the Hudson-Fulton Celebration of 1909 was secretary and expert for the Aeronautics Committee. He was a member of the committee appointed to organize the International Electrical Congress at St. Louis in 1904, a member of the departmental jury, and chairman of the jury on telegraphy, telephony and wireless at that time.

His professional literary works include “Radium and Other Radio-active Substances,” the first book in the world published upon the subject, and which has gone through several editions here and abroad, and important papers before engineering and scientific societies, articles in the encyclopedias and technical periodicals. He has been offered, on several occasions, the editorship of electro-technical publications. In 1907 he was one of the editors of the official book of the Aero Club if America, “Navigating the Air,” and at one time was a member of the Franklin Institute’s committee to report upon the work of Professor and Mme. Curie, the discoverers of radium.

On the 3rd of January, 1894, he was married at Cleveland, Ohio, to Miss Alice Maude White, daughter of Thomas H. White, Esq., of that city, and has one child. Their New York residence was at 153 West Forty-sixth Street.

Mr. Hammer has long been regarded as one of America’s foremost electrical experts, and his over seven years’ experience in European countries, coupled with an experience in this country of nearly a quarter of a century, has given him an international reputation as a consulting electrical engineer and scientist.