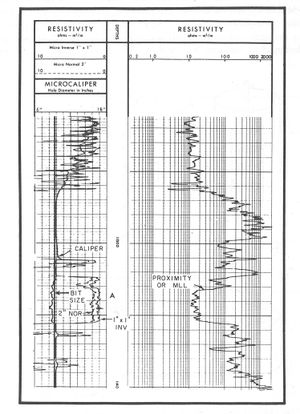 Graph depth showing the diameter of the hole drilled and the resistivity of the rocks encountered.

Well logs played a key role in the global petroleum and gas exploration and reservoir evaluation since their first successful implementation at the beginning of the 20th century. When well drilling is finished a decision must be made as to whether to complete the well or plug it up and abandon it. By the early 1930s, well logging was ane essential global business, since it proved that it could provide crucial data to making the correct decision.

Once a well is drilled, the only economical means of finding out exactly what is down there is with a well log, which generates a graph of depth in a well representing some of the characteristics or properties of the rock formations. The rock properties are derived from measurements made when instruments are lowered into the well on an electrical wireline or cable. The measurements made downhole by instruments can be processed downhole and transmitted to the surface, or the unprocessed measurements can be transmitted to the surface for processing. Normally data is recorded as the logging instrument is pulled up the borehole from the bottom. This process is referred to as logging the well.

Since the 1930s, many types of well logs were developed:

Well logs are important to the petroleum industry because they provide numerous rock property measurements, like the reservoir conditions of pressure, temperature, and fluid content. The quality of well logs can vary significantly from one well to the other. Field practice showed that a type of log used in a well may also change from one well to another. Therefore, geologists and reservoir engineers learned along the years that a given type of log has its own volume of investigation within which it responds to the rock property it measures. Common uses for well logs in the petroleum industry include:

Well logs have sometimes been shown to have their limitations, early detractors tended to downgrade the importance of well logs to the petroleum and gas industry. The recorded data may be a distorted version of the actual rock properties due to the response characteristics of the logging tool. In addition, porosity and saturation cannot be directly measured with well logs. Therefore, equations were developed to convert the recorded data to the information necessary for reservoir evaluation. This process has been defined in the industry as well log interpretation. The advancement of the knowledge and understanding of logging tool responses and the development of more advanced models of interpretations, comparative and cross-evaluation of big datasets, allowed the petroleum industry to improve discoveries and reduce the rate of the drilling of dry or sterile wells.

Well logs can sometimes be used to identify the presence of hydrocarbons where the quality of the reservoir rock is so good that nearly all traces of hydrocarbons have been flushed from the drilling cuttings circulated to the surface by the drilling fluid. Decades of logs have demonstrated that the best hydrocarbon "showings" occur in the poorer reservoir rocks, whereas the poorer showings occur in the best reservoir rocks. Because a shade of unpredictability characterizes the subsoil investigation, well logs confirmed their pivotal importance to identify the most commercially valuable petroleum reservoirs.

Retrieved from "https://ethw.org/w/index.php?title=Well_Logging&oldid=185922"
Categories:
This page was last edited on 13 August 2021, at 19:08.
About ETHW
Policies and disclaimers