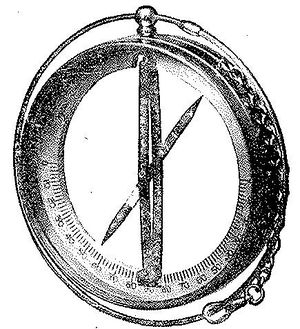 The magnetic dip needle or miner's compass was the first scientific instrument to be professionally used for locating ore bodies in the past centuries and still considered in the 1930s. It has been in use in Sweden for over two hundred years for tracing deposits of magnetite,[1] and it was indispensable in the Lake Superior mining region to locate hematite.[2] In proportion to its cost, the dipping needle has likely given much more value to prospectors in search of ores better than many other early geophysical tools.

The instrument consisted of a needle supported in a brass case and pivoted at the center on jewelled bearings so as to swing freely. The needle was a highly magnetized bar of steel processed so as to retain its magnetism. In using the instrument, it is first carried over the surface of the ground in a general north and south direction until disturbances were noted. Parallel lines were then laid out a few feet apart and the amount of attraction noted at intervals and recorded on a map for future reference. The map would have so shown variations in the vertical component of the magnetic field and indicated the general location of disturbing factors. The amount of dip was greater over the south magnetic pole of the ore body than over the north. An ordinary compass could then be used to determine the values of the horizontal component, as indicated of the needle from the true magnetic north. As soon as enough data were obtained to construct a map showing the lines of equal declination and inclination – or, curves of equal intensity of the vertical and horizontal components of the magnetic field – the location and extent of the ore body could be determined quite precisely.

A patent was obtained in 1910 on an adaptation of the dipping needle and called Flash Light Dip Needle which could be carried close to the ground and deviations of the needle detected by means of a small electric light bulb. It consisted of a dipping needle suspended from a hollow handle containing a dry cell battery. An insulated copper wire leaded from one terminal of a battery to an insulated contact plate mounted in the case of the dipping needle. The needle itself carried a small contact (pin or brush) which was intended to make contact with the plate when the needle was deflected from a horizontal position-the circuit being completed through the supporting stem. Included in the circuit was a small electric light bulb which was mounted on the handle so as to be always in view of the operator. Unless carried very carefully, many false signals resulted as it was practically impossible to carry a device of this kind without causing the needle to swing while walking.

In taking readings with the dipping needle, or with any of the magnetic instruments, allowance was necessarily due because the several variations coming from the fluctuating electrical conditions of the earth and atmosphere. The angle of declination had to be known for the locality, since this angle could vary from point to point over the earth’s surface.

Whiston, William, and Robert Norman. The Longitude and Latitude Found by the Inclinatory or Dipping Needle; Wherein the Laws of Magnetism Are Also Discovered. ... to Which Is Subjoined, Mr. Robert Norman's New Attractive, or Account of the First Invention of the Dipping Needle. London: Printed for J. Senex; and W. Taylor, 1721.