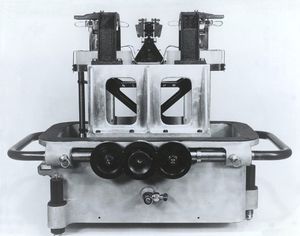 Gravity pendulum device in the 1930s

The U.S. Coast and Geodetic Survey[1] (first established by President Thomas Jefferson in 1807 as the National Geodetic Survey,[2] then renamed in 1878) in the 1920s conducted a series of experiments to determine the feasibility of the pendulum method to locate petroleum deposits. This system is based on the principle that there is a definite relation between the gravitational force and the density of the earth's crust, similar to a torsion balance, which already demonstrated a high potential in finding petroleum. Since the force of gravity tends to attenuate the swing of the pendulum, the denser the subsoil structure is, the more the pendulum will present a different, slower, oscillating movement. The success of this system depended on the very accurate measurement of pendulum's with respect to time of oscillation, and its comparison with tests at other landmark points.

A gravity pendulum is designed to swing in an air-tight case in which the time required to make an oscillation is accurately measured. Tests were made at a number of points over a proven field to determine the force of gravity at these places. The same tests then carried out in new territory will show differences in the gravitational force, and thus give useful hints on the character of the sub-structure.

The pendulum was carefully mounted and suspended on a knife edge; the adjustment was perfect that on being started by a touch of the hand, it would have oscillated for twelve hours. A small mirror was mounted on the pendulum so as to throw a beam of light which may be observed through a small telescope. The period of swing has been measured within one ten-millionth part of a second. The actual measurement of the period of swing was a complicated process, but the extreme accuracy with which it may be reproduced, gave the pendulum a high credibility among petroleum geologists. At the same time of these government efforts, petroleum companies also established their own geophysical research and development departments, hiring physicists and electrical engineers. Between the 1920s and 1930s, before gravimeters took over the place of gravity pendulums in the petroleum prospecting, the development of pendulums was a prolific industrial-scientific effort that involved also leaders in material sciences companies and artificial production by mean of controlled processes like General Electric, and precision optics like Bausch & Lomb.