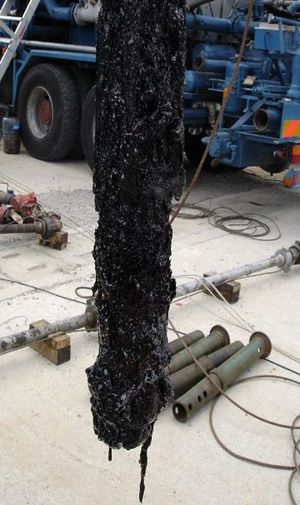 Asphaltene[1] deposition still causes production losses today by plugging tubing and damaging drilling tools. Asphaltenes are the term given to the black, carbonaceous components of petroleum which occur in many crude oils in the form of colloidal-suspended solid particles. 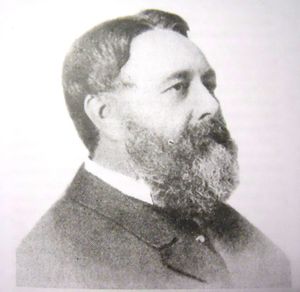 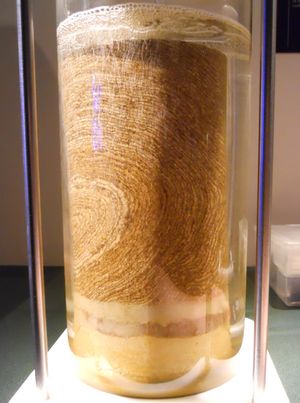 Core section of a petroleum bearing sedimentary rock (Displayed in the permanent exhibition of the Drake Well Museum, Titusville, PA). 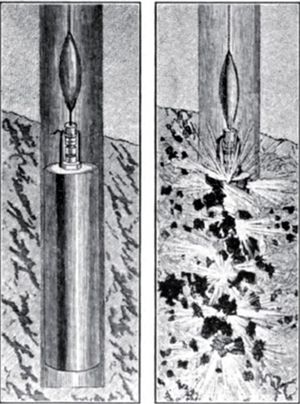 Deflagration of the percussion cap system conceived the Roberts brothers. 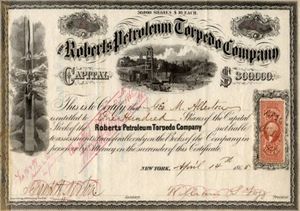 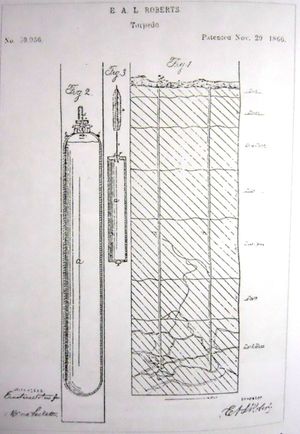 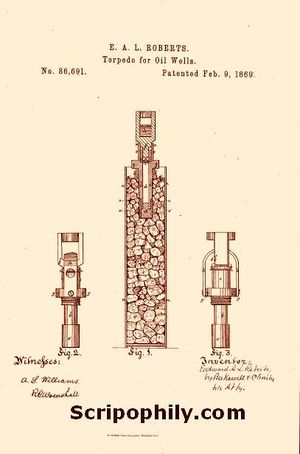 One of the latest patents granted to the Roberts’ Company for torpedo shells charged with gunpowder. U.S. Patent no. 86691, February 1869.

The torpedo was the earliest successful enhanced oil recovery (EOR) technology, developed in the United States in the early 1860s. The technology was based on the controlled deflagration (the “shooting”) of a given amount of explosive at a specific depth into the oil well. Originally, this practice was conceived to free up clogged oil wells from the paraffinic component, which as naturally included in some qualities of petroleum. Later, following the advancement of the studies on rocks composition and mechanics, the torpedo technology was experimented to increase the productivity of those wells that were considered exhausted.

In 1849, the English geologist and pioneer in the use of microscopes in the petrology discipline Henry Clifton Sorby (1826-1908), presented his work on rock thin-sections, microscopic views of rock minerals and their textures, which in few years proved to be pivotal for the understanding of the composition of petroleum reservoirs rocks.

In 1856, Henry Philibert Gaspar Darcy (1803-1858) published in his landmark book The Public Fountains of the City of Dijon, containing the studies he conducted on the pattern and dynamics of water flows through the porosity of rocks (e.g. limestone[2] and sandstone[3]), which beginning in the early 20th century, found wide use amongst petroleum engineers. Other important ideas on the porosity of oil limestone have been proposed in the same years by the Canadian-Welsh geologist William Edmond Logan (1798-1875). In 1860, the American geologist and chemist Thomas Sterry Hunt (1826-1892) published new research on origin of petroleum, its migration and deposition in the underground. In the 1860s, geologists both from North America and Europe demonstrated that the few oil deposits known at the time were all included into sedimentary rocks, and how petroleum was trapped in the form of micro-droplets filling the microscopic porosities of such rocks.

The fast growing petroleum market of the early 1860s necessitated the development of new and more practical ways of oil drilling and production. For example, the old fashion manual dug could not sustain the contemporary increasing demand. The massive introduction of practices like mechanic perforation, well casing, and oil production by means of pumps produced thin (a few inches in diameter) and deep wells bored into sandstones rich in oil. A quite common problem in the Pennsylvanian oil fields was wells clogging due to paraffin and asphaltene deposits, two common dissolved solid components of crude petroleum. In those deposits where the petroleum is mostly paraffin-based, the latter substance would build up and plug the rock pores stopping the flow of oil, and eventually leaving the mineral potentially still entrapped in the rock formation unrecoverable. Other methods were already in use to remedy this issue, like the forging of tools to scrape the deposition off; pouring chemical agents to melt and thin the clog; alternate injection of streams of hot water and air to blow out the chunks of deposition; or, steaming to melt the mass directly in the well and later remove it via suction pumps. However, these methods were not very effective and soon it was borrowed from the water well practice the idea to break the petroleum well walls through explosives.

Between 1860 and 1865, some 40 oil wells were detonated using different experimental explosives and triggers. The most diffused system was the combination of common black powder ignited with a fuse. In 1863, William Reed introduced the concept of electrical ignition by wire. In 1864, Frederick Crockers conceived a new trigger system, which involved the placement of military grenade with above attached an adapted cartridge down the well. Crocker dropped a weight from the wellhead that fired the grenade. The turn in this pioneering well stimulation practice arrived due to the former artillery colonel of the Union Army Edward August Leonard Roberts and his brother and firm partner Walter B Roberts. On January 28, 1865, they shot sixteen pounds of powder in a well exploding at the depth of 463 feet (141 metres). The first Roberts torpedo was a cylindrical tin-can fired by the action of a weight dropped along a suspension wire onto the specifically built percussion caps, which were placed on the top edge of the torpedo.

The following day, that well was in production of sixty barrels of oil per day. Next month, another well shoot produced twenty barrels per day. After a second shoot taken a few days later the production scaled up to eighty barrels daily. With these strong credentials, the Roberts brothers soon gained the confidence of the local oil well owners and set up a very lucrative business together. Many individuals experimented with the well shooting practice using different explosives, containers, and methods of detonation sometimes very similar to each other. However, Roberts was the first to conceive a specific apparatus from the scratch and to apply for the patent. On February 1865, Roberts formed the Roberts Petroleum Torpedo Company.[4]

In 1866, the patent (U.S. Patent No. 59036) gave his company total control over the well shooting practice in all of the U.S. oil fields. Roberts' monopoly was harshly disputed by both oil shooters and wells owners, but already in 1867 the United States Supreme Court confirmed the genuineness and validity of Roberts patent.

Between 1867 and 1868, the shooting well technology evolved to a further level with the application of nitroglycerine in place of gunpowder. The new liquid explosive was 13 times more destructive than common gun powder and it also blasted 25 times quicker. Given his predominance over the torpedoes market, it was not difficult for Roberts to be granted the license to craft and use nitro-glycerine under the Nobel brothers patent transferred in the U.S by the end of 1866 through the United States Blasting Oil Company.[5] The Roberts Petroleum Torpedo Company started to shoot torpedoes filled with liquid nitro-glycerine in 1867. However, the switch from gun powder to the more efficient nitro-glycerine was not a clear and sudden break with the past, and the two blasting systems coexisted for some years. Still in 1869 Roberts' company was patenting a gun powder system, chiefly to prevent the emergence of possible competitors with substantial variations/upgrades to his system.

Shooting oil wells was considered very dangerous work. The introduction of nitroglycerin did improve the quality of the work itself but also increased exponentially the risks in carrying the operation. The torpedo blast at the bottom of the well was followed by an uncontrollable mass of debris, often including the casing iron pipes, jumping out the mouth of the well. Rock and ground were expelled for a long distance in all directions. The shooting of wells in areas close to populated centers became illegal. Nitroglycerine factories and depots had to be built in isolated places (preferably in forestall areas, so in case of accidental explosion the trunks would have contained the destructive effect of the shock wave) and kept under constant surveillance. The oil well shooter become a new, dangerous, but well paid job in the rising oil industry. It was a professional category forged and trained under the aegis of the Roberts Petroleum Torpedo whose monopoly lasted until 1883.

During its 18-year monopoly, the company of the brothers Roberts spent nearly $250,000 (roughly $6 million in 2019 dollars) in legal actions, and to pay two hundred staff to seek and report the infractions to his patents. After 1883, the well shooting practice grew exponentially, and between the 19th and the 20th century more than 100 licenses for the handling of nitroglycerine in the oil industry setting were recorded. Still after a century of shooting wells, this pioneering enhanced oil recovery system remained almost unchanged because its easiness, functionality and effectiveness. An exception is for the adoption and the regulation of the blasting by electric impulse command, the well shooters were used to pour manually nitroglycerin into the metal cylinder torpedo-shaped still into the 20th century.

Carll, John Franklin. The geology of the oil regions of Warren, Venango, Clarion, and Butler counties : including surveys of the Garland and Panama conglomerates in Warren and Crawford, and in Chautauqua Co., N.Y., descriptions of oil well rig and tools, and a discussion of the preglacial and postglacial drainage of the Lake Erie country. Second Geological Survey of Pennsylvania: 1876 to 1879. Report III. Harrisburg, Pa.: Board of Commissioners for the Second Geological Survey of Pennsylvania, 1880.

Giddens, Paul H. Early Days of Oil, a Pictorial History of the Beginnings of the Industry in Pennsylvania. Princeton: Princeton University Press, 1948.