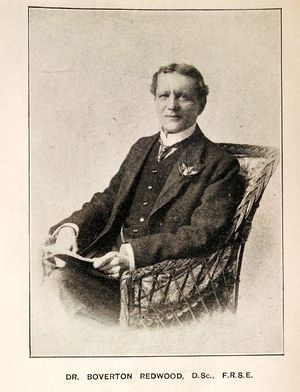 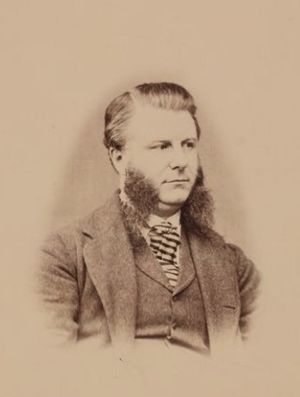 Redwood, Sir (Thomas) Boverton, first baronet (1846-1919) was born in a high bourgeoisie family active in the chemical and pharmaceutical industry. He graduated in London at the University College School, and started to work with his father as a chemist. Redwood's turn toward the petroleum sector was between 1866 and 1869, when he was elected the first member and then secretary of the Petroleum Association of London, one of the earlier professional society in the sector, which activities are continued first by the Institute of Petroleum Technologists, and then the Institute of Petroleum. Redwood's skills in analytical chemistry made of him an expert in the subject of petroleum, derived oils, and flashing points. In 1877, he was invited by the British leading scholar in oil chemistry, Frederick Augustus Abel (1827-1902), better known for his achievements in explosives studies,[1] to work on flashing points standards.

The studies developed by Redwood (partly during a research stay in the USA) in the following two years resulted in the 1879 amendment (no 161) of the Petroleum Act, initially passed in 1871,[2] and the improvement of the test and instrument earlier conceived by Abel. At this point of his career in petroleum studies, after the mentoring and then partnership with Abel and the numerous scientific acknowledgements, Redwood in the early 1880s was in the cadre of those scientists that pioneered the early modern science and technology of petroleum. Between 1880 and 1883, he completed original studies on the behavior of petroleum at different pressure and temperatures, and toured Europe, the Caucasus and India, focusing his research on petroleum storage and transportation. In 1885-1886, he did consulting studies on the safety standards for the making of kerosene lamps, and also developed an improved version of viscometer[3] that soon after became a standard tool in the petroleum industry of many countries. In 1889, Redwood, together with James Dewar (1842-1923),[4] Scottish chemist expert in gas liquefaction, patented a distillation process at controlled pressure and temperature, which could break an convert heavy petroleum into light oils, which can be considered an early version of the thermal cracking process.

In the following decade, Redwood engineered other testing instruments for the petroleum storage and transportation, and was consultant for the plan of feasibility for the shipping via Suez Canal of petroleum from the East Indies to Europe. Eventually, in 1899, after more than 30 years of patents and acknowledgements, he established in London what became the leading international petroleum consulting firm of the early 20th century. He personally travelled in many countries and sent his associated consultant geologists and engineers worldwide. Boverton Redwood passed away on June 4th, 1919, in London at the age of 73 and was one of the most influential European petroleum scientists and technical consultants of his times.

Affiliation to professional and learned societies

Anonimous. “The Late Sir. Boverton Redwood”. Journal of the Institution of Petroleum Technologists and Record of Transaction V, no 20 (1919): 241-249.